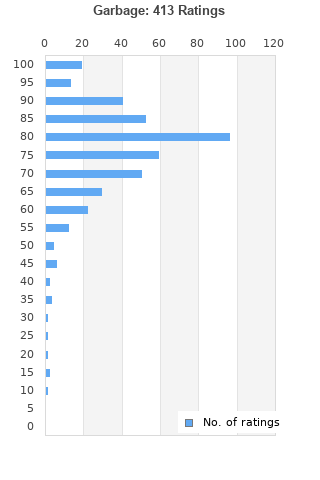 GARBAGE – VERSION 2.0 / CD / LIKE NEW CONDITION
Condition: Like New
Time left: 49m 25s
Ships to: Worldwide
$3.00
Go to store
Product prices and availability are accurate as of the date indicated and are subject to change. Any price and availability information displayed on the linked website at the time of purchase will apply to the purchase of this product.  See full search results on eBay

Garbage is ranked as the best album by Garbage. 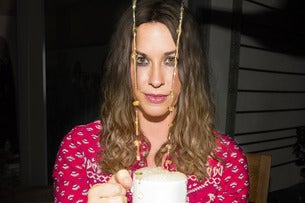 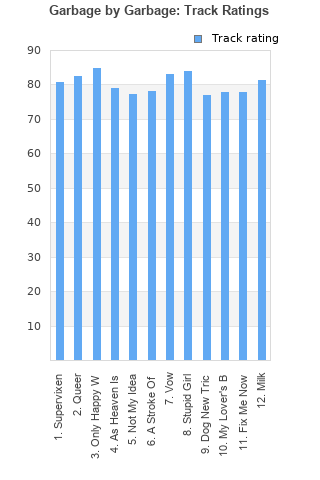 Rating metrics: Outliers can be removed when calculating a mean average to dampen the effects of ratings outside the normal distribution. This figure is provided as the trimmed mean. A high standard deviation can be legitimate, but can sometimes indicate 'gaming' is occurring. Consider a simplified example* of an item receiving ratings of 100, 50, & 0. The mean average rating would be 50. However, ratings of 55, 50 & 45 could also result in the same average. The second average might be more trusted because there is more consensus around a particular rating (a lower deviation).
(*In practice, some albums can have several thousand ratings)
This album is rated in the top 5% of all albums on BestEverAlbums.com. This album has a mean average rating of 76.0/100. The trimmed mean (excluding outliers) is 77.1/100. The standard deviation for this album is 14.1.

This album is great from start to finish with great music and attitude on questioning yourself, relationships and rebounding from mistakes. Tracks like Supervixen and Only Happy When It Rains are adrenaline magic along with the calmer tracks like Milk. To me this album is Garbage at their best!

Just got this album in March 2018 and it is full of killer tunes. I recall loving the single Stupid Girl at the time along with Only When It Rains and Milk. But there is even more to this album with other highlights including Supervixen and Queer. Shirley Manson knows how to sneer and deliver

Not one bad track, one of the best pop/rock albums of the 90's.

This album rocks. It is fun, loud and exciting. Oh, and surprising! Queer and Stupid Girl are stand out songs. Love the album cover too.

The most "edgy nineties" alternative rock album.
Just look at the band name

I think their second record is stronger, but this is a solid debut.

The emotions batter down. Striking, aggressive, possibly posing, I don't care. When 'As Heaven Is Wide' and 'Queer' the only care I have is for how much my world just go shook. And 'Milk'... pure smooth feels. Lovely lights and Cadbury's Chocolate poured from high heights. 'Not My Idea' raves about starting a fire. This album puts a fire in me.

Your feedback for Garbage