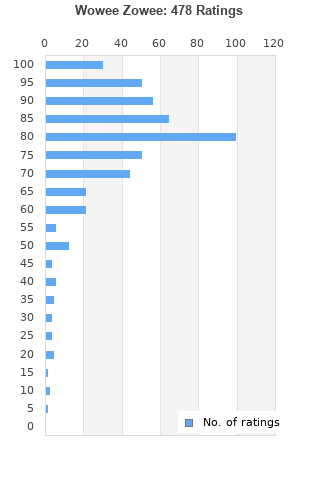 PAVEMENT wowee zowee-1995 framed original poster sized advert
Condition: Very Good
Time left: 1d 36m 4s
Ships to: Worldwide
£35.00
Go to store
Product prices and availability are accurate as of the date indicated and are subject to change. Any price and availability information displayed on the linked website at the time of purchase will apply to the purchase of this product.  See full search results on eBay

Wowee Zowee is ranked 3rd best out of 14 albums by Pavement on BestEverAlbums.com.

The best album by Pavement is Crooked Rain, Crooked Rain which is ranked number 178 in the list of all-time albums with a total rank score of 10,528. 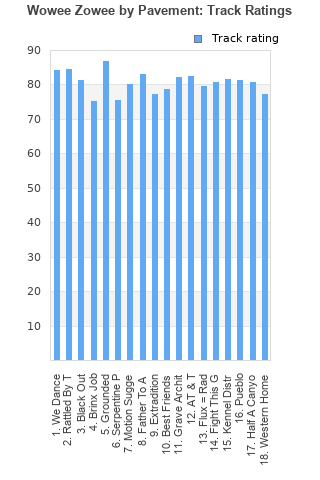 Rating metrics: Outliers can be removed when calculating a mean average to dampen the effects of ratings outside the normal distribution. This figure is provided as the trimmed mean. A high standard deviation can be legitimate, but can sometimes indicate 'gaming' is occurring. Consider a simplified example* of an item receiving ratings of 100, 50, & 0. The mean average rating would be 50. However, ratings of 55, 50 & 45 could also result in the same average. The second average might be more trusted because there is more consensus around a particular rating (a lower deviation).
(*In practice, some albums can have several thousand ratings)
This album is rated in the top 2% of all albums on BestEverAlbums.com. This album has a Bayesian average rating of 79.9/100, a mean average of 78.7/100, and a trimmed mean (excluding outliers) of 80.1/100. The standard deviation for this album is 15.9.

Awesome overall with just a bit of a slowdown in the second half.

Great album, although admittedly not all 18 tracks are as great as "We Dance"

Best Tracks: Serpentine Pad, Father to a Sister of Thought

There's a lot of filler on this album, but the songs that are good are some of the best songs pavement recorded. Rattled by the Rush, Grounded, At&t, Kennel District are some of the best songs ever in my opinion. Grave Architecture, Black Out, Father to a Sister of a Thought and more are also pretty good. But then you also have songs like Expedition and Serpentine Pad that bring it down a little. Still a very good album though, would recommend.

There is absolutely no doubt that Wowee Zowee is my favourite Pavement album.

Pavement's peak in a non-rigid, chaotic sea of great LPs.

Wowee zowee, is Pavement's masterpiece. It's an epic record, Stephen Malkmus' white album. Great songs here; rattled by the rush, serpentine pad, and, best friend's arm, are just three of the many wonderful songs on this LP. Slanted and enchanted, is probably most people's choice as best Pavement record, but for me, it's this one. Casual genius.

Your feedback for Wowee Zowee