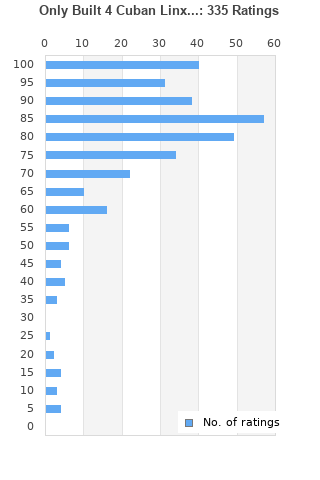 RAEKWON - ONLY BUILT 4 CUBAN LINX 2 VINYL LP NEW+
Condition: New
Time left: 2d 8h 45m 21s
Ships to: Worldwide
$44.14
Go to store
Product prices and availability are accurate as of the date indicated and are subject to change. Any price and availability information displayed on the linked website at the time of purchase will apply to the purchase of this product.  See full search results on eBay

Only Built 4 Cuban Linx... is ranked as the best album by Raekwon. 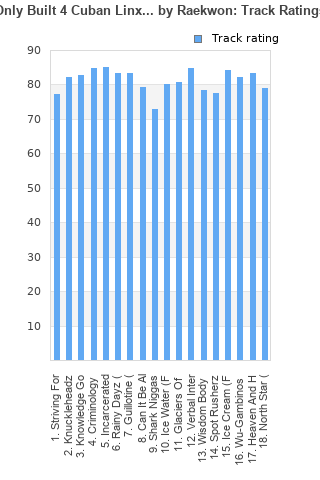 Rating metrics: Outliers can be removed when calculating a mean average to dampen the effects of ratings outside the normal distribution. This figure is provided as the trimmed mean. A high standard deviation can be legitimate, but can sometimes indicate 'gaming' is occurring. Consider a simplified example* of an item receiving ratings of 100, 50, & 0. The mean average rating would be 50. However, ratings of 55, 50 & 45 could also result in the same average. The second average might be more trusted because there is more consensus around a particular rating (a lower deviation).
(*In practice, some albums can have several thousand ratings)
This album is rated in the top 2% of all albums on BestEverAlbums.com. This album has a mean average rating of 78.0/100. The trimmed mean (excluding outliers) is 81.1/100. The standard deviation for this album is 20.6.

Why break up the group if you're all gonna sound the same. I like his style since the late '00s much more; it sounds more genuine and his own.

As good as Liquid Swords, almost as good as 36 Chambers. Stellar.

Good, would be better if it wasn't so long. Production is good, great often times. I think the album suffers a bit from age, like most 90s hip-hop it just sounds so dated that the test of time hasn't been completely fair to this album.

Best Wu album for me and RZA's most solid production.

Update: This is the greatest album I've heard in 2 years, because that's when I listened to Beach Boys' Pet Sounds. Well done, Raekwon and Ghostface Killah. I love Ghostface Killah's voice and his flows. A lot of flows in this CD. A lot of art, talent, skill, mastery of lyricism. Real hip-hop. This is probably the last great hip-hop album. It reminded me that hip-hop was at least alive in '95.

Dark mafioso stories but told in a ridiculously awesome way, sort of like "Breaking Bad"

Your feedback for Only Built 4 Cuban Linx...