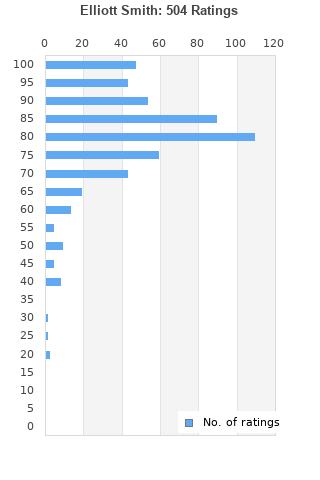 The best album by Elliott Smith is Either/Or which is ranked number 131 in the list of all-time albums with a total rank score of 12,695. 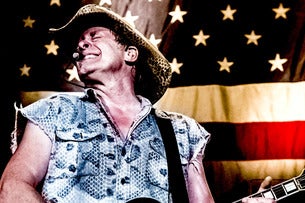 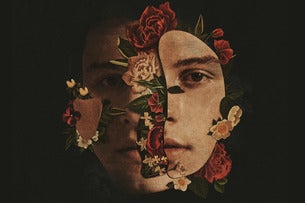 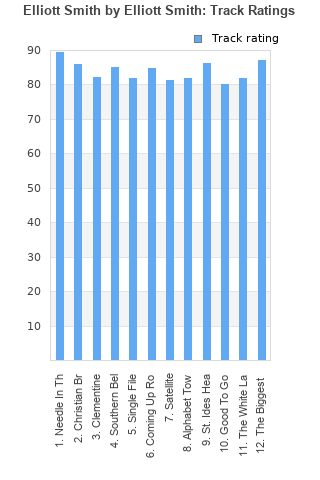 Rating metrics: Outliers can be removed when calculating a mean average to dampen the effects of ratings outside the normal distribution. This figure is provided as the trimmed mean. A high standard deviation can be legitimate, but can sometimes indicate 'gaming' is occurring. Consider a simplified example* of an item receiving ratings of 100, 50, & 0. The mean average rating would be 50. However, ratings of 55, 50 & 45 could also result in the same average. The second average might be more trusted because there is more consensus around a particular rating (a lower deviation).
(*In practice, some albums can have several thousand ratings)
This album is rated in the top 1% of all albums on BestEverAlbums.com. This album has a Bayesian average rating of 80.7/100, a mean average of 80.4/100, and a trimmed mean (excluding outliers) of 80.9/100. The standard deviation for this album is 13.6.

The forgotten Elliott Smith album? Yes and no - Yes only the ES fans could list half a dozen songs on this album , No - many of the songs are well known in their own right and are fondly regarded widely as folk at its finest in the 1990’s and I’m referring to “Needle In The Hay”, “Coming Up Roses”, “St.Ides Heaven” and “Biggest Lie”

It starts to rain during a freezing winter night, so you make your way to an underpass. You huddle up with a heroin junkie for warmth. He whips out a guitar, and plays the saddest songs about addiction and self-hatred you've ever heard.

I disliked this on first listen. It wasn't an attentive listen. Then I came back recently, and focused on it. I liked it better. Then I found myself playing it on repeat. It's fantastic, so tender and more varied dynamically than Roman Candle. These songs build and grow while Roman Candle's drone. I love both albums, but this one isn't too short the way Roman Candle is.

Are there many album openers in history better than “Needle in the Hay”? On the opposite end of the record is the similarly perfect closer “The Biggest Lie”. In between lies the definitive document of Smith's morose and romantic acoustic side as well as the first clear updates to the percussion-driven style from his Heatmiser days. Even when the songwriting isn't quite on point, this record carries a uniquely mystical quality that I can't quite put my finger on.
Favorites: “Needle in the Hay”, “St. Idles Heaven”, “The Biggest Lie”, “Christian Brothers, “Southern Belle”, “Coming Up Roses”, basically everything else really

Simply a perfect record. It's quiet and unassuming but has depth and darkness too. A highly recommended listen

favorite elliott smith lyrics on 'st. ides heaven' - "high on amphetamines/the moon is a light bulb breaking/it'll go around with anyone/but it won't come down for anyone/ and i'll go around with anyone/but i won't come down for anyone' amphetamines were definitely a big thing for him over his career, and were one of the only drugs still found in his blood after his death (but people don't often mention this because he had a prescription, however even prescribed amphetamines like adderall can still mess you up)

this is one of my all time favorite records and is probably tied with 'from a basement' for me. every song is amazing alone but it plays so well as a full album.

I haven't listened to an opener sadder and more desperate than "Needle in the Hay".

Not his best, but still another excellent collection of songs from one of the greatest songwriters of the nineties. Raw and intimate.

Your feedback for Elliott Smith