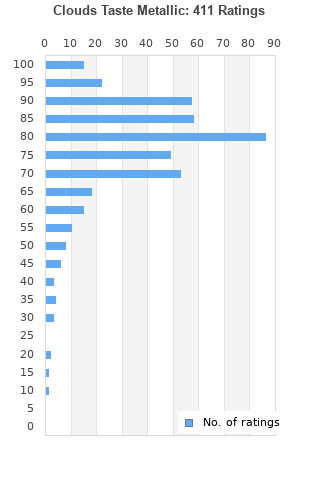 Clouds Taste Metallic is ranked 3rd best out of 46 albums by The Flaming Lips on BestEverAlbums.com.

The best album by The Flaming Lips is The Soft Bulletin which is ranked number 108 in the list of all-time albums with a total rank score of 14,336. 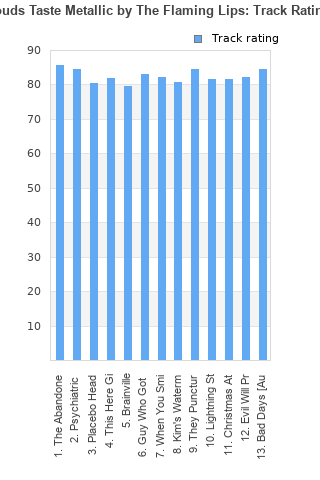 2
2.
Psychiatric Explorations Of The Fetus With Needles
Rating: 84 (81 votes)Comments:

0
6.
Guy Who Got A Headache And Accidentally Saves The World
Rating: 83 (75 votes)Comments:

Rating metrics: Outliers can be removed when calculating a mean average to dampen the effects of ratings outside the normal distribution. This figure is provided as the trimmed mean. A high standard deviation can be legitimate, but can sometimes indicate 'gaming' is occurring. Consider a simplified example* of an item receiving ratings of 100, 50, & 0. The mean average rating would be 50. However, ratings of 55, 50 & 45 could also result in the same average. The second average might be more trusted because there is more consensus around a particular rating (a lower deviation).
(*In practice, some albums can have several thousand ratings)
This album is rated in the top 4% of all albums on BestEverAlbums.com. This album has a Bayesian average rating of 77.7/100, a mean average of 76.8/100, and a trimmed mean (excluding outliers) of 77.8/100. The standard deviation for this album is 14.9.

Absolute classic. I prefer Hit to Death in the Future Head, but this is definitely their "psychedelic noise pop" peak. Every song is actually great, I really enjoy This Here Giraffe, Kim's Watermelon Gun, and Brainville.

Top 3 Lip's album. It was a strange point in their career. It was a slight improvement over Transmissions, but no real radio hit so it didn't sell and they were in danger of being dropped at this point. They were typecast as a one hit wonder and had a lot to prove. But some great songs here, Abandoned Hospital ship, psychiatric exploration and brainville are highlights

Why isn't this album up there with with soft bulletin and pink robots? Its better than both in my opinion.

I've only heard it a few times and it's solid enough throughout - but hasn't quite grabbed me like Transmissions, Yoshimi or Soft Bulletin.

Bumped this album up a bunch on my main chart. Listening to this again I was thinking, well shoot I love this album so much I never get tired of it. Flaming Lips at their best!

And so we reach the apex of their ten year noise rock sequence, from their debut "Hear It Is" to this sonically dense, undeniably great record "Clouds Taste Metallic". Just when you think they couldn't top "Transmissions", they do ! It's a dizzying, wondrous pop record drawing from their earlier forays into psychedelia.

With "Clouds Taste Metallic", The Flaming Lips have finished constructing an impressive chain of noise pop records that has lasted an entire decade. This one may well be the pinnacle of their career at the point of release. The record has more imaginative and transporting lyrics than ever and is firmly rooted in psychedelia complete with waves of bleakness, longing and melancholy (and ends perfectly on a bittersweet note). One of their very best.

Loud, abrasive, and proud. The way only the Flaming Lips could do

Total lo-fi mastery. If GBV wrote this, it would be their magnum opus.

This is one of my favourite Flaming Lips albums. A kind of psychedelic indie pop for the nineties, Brian Wilson meets Todd Rundgren at an acid party. Like most Lips records it's beautiful and noisy, featuring great songs in, brainville, guy gets a headache, and, kim's watermelon gun. Some great songtitles here. Great fun.

Your feedback for Clouds Taste Metallic