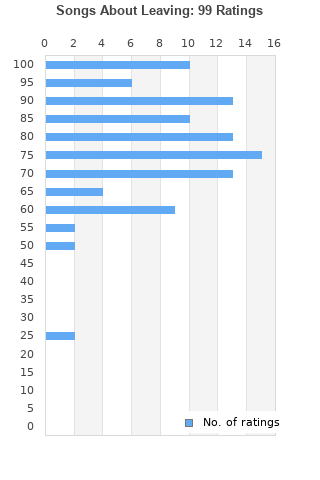 CARISSA'S WIERD SONGS ABOUT LEAVING CD HARD TO FIND NICE CONDITION
Condition: Very Good
Time left: 25d 10h 22m 40s
Ships to: Worldwide
$15.00
Go to store
Product prices and availability are accurate as of the date indicated and are subject to change. Any price and availability information displayed on the linked website at the time of purchase will apply to the purchase of this product.  See full search results on eBay

Songs About Leaving is ranked as the best album by Carissa's Wierd. 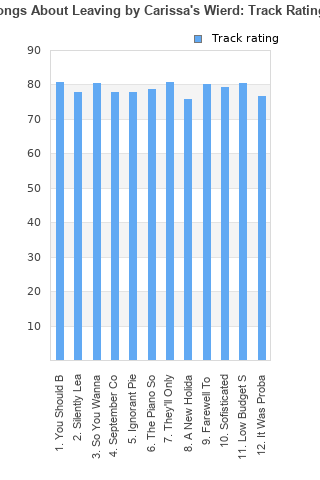 Rating metrics: Outliers can be removed when calculating a mean average to dampen the effects of ratings outside the normal distribution. This figure is provided as the trimmed mean. A high standard deviation can be legitimate, but can sometimes indicate 'gaming' is occurring. Consider a simplified example* of an item receiving ratings of 100, 50, & 0. The mean average rating would be 50. However, ratings of 55, 50 & 45 could also result in the same average. The second average might be more trusted because there is more consensus around a particular rating (a lower deviation).
(*In practice, some albums can have several thousand ratings)
This album is rated in the top 2% of all albums on BestEverAlbums.com. This album has a Bayesian average rating of 79.2/100, a mean average of 78.6/100, and a trimmed mean (excluding outliers) of 80.0/100. The standard deviation for this album is 15.3.

Sadness and heartbreak transformed into music.

What a beautiful discovery!!!!!

Great sad and slow piece. The piano and strings on this album are top notch. Farewell to All These Rotten Teeth and Low Budget Slow Motion Soundtrack Song for the Leaving Scene are amazing songs that definitely deserve a listen.

Hell of a listen. Glad I came across this one. Will definitely be coming back for multiple listens but the first impression is very strong here. Only way I can think to describe it at this point is very surreal; it's like Belle and Sebastian in super slow motion.

You're welcome, Precedent. Just glad you appreciated that, it took me a few listens to. With that, disregard my previous comment, there are so many peaks that make up the album and make it so extra-special.

Incredible album! This is beautiful, thank you Suede for the recommendation!

Such a tragically beautiful album; it's underrated on this site and generally everywhere.

Nice to see that a few of the members went on to pursue another musical project (Band of Horses) which then gained decent recognition, so that's an upside.

It's a little too slow and a little too sad though, don't take that badly, but it just has no peaks for me, and I like peaks in an album.

Your feedback for Songs About Leaving