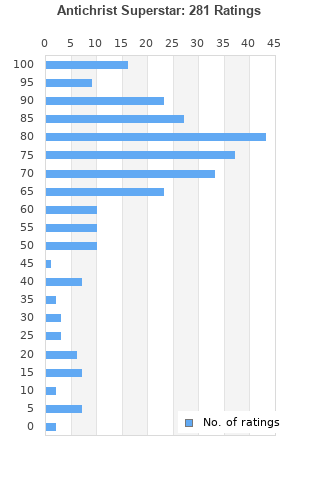 Antichrist Superstar is ranked 2nd best out of 15 albums by Marilyn Manson on BestEverAlbums.com.

The best album by Marilyn Manson is Mechanical Animals which is ranked number 1665 in the list of all-time albums with a total rank score of 1,033. 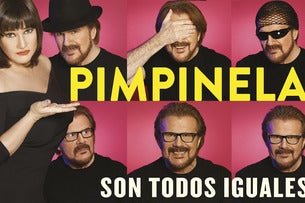 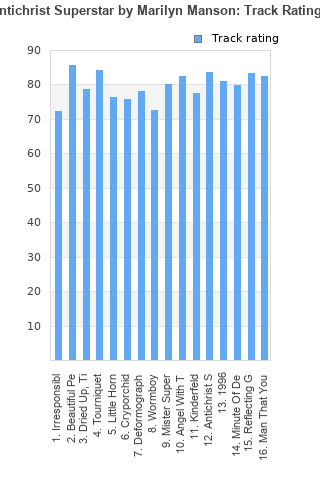 Rating metrics: Outliers can be removed when calculating a mean average to dampen the effects of ratings outside the normal distribution. This figure is provided as the trimmed mean. A high standard deviation can be legitimate, but can sometimes indicate 'gaming' is occurring. Consider a simplified example* of an item receiving ratings of 100, 50, & 0. The mean average rating would be 50. However, ratings of 55, 50 & 45 could also result in the same average. The second average might be more trusted because there is more consensus around a particular rating (a lower deviation).
(*In practice, some albums can have several thousand ratings)
This album has a Bayesian average rating of 68.8/100, a mean average of 68.6/100, and a trimmed mean (excluding outliers) of 68.6/100. The standard deviation for this album is 23.3.

misunderstood classic. probably just too hateful and militantly anti-religious for most donkeys. w/e, the production matches the hatred and nihilism of the lyrics and the vocals themselves are powerful and dirty. this is as evil as rock has ever gotten w/o crossing over into some form of extreme metal. if you were raised by hardcore christians and got past all that BS you should be able to feel this. I guess that's not something most ppl will be able to relate to either, w/e, like I said it's misunderstood.

P.S. forget the rest of MM, his next album is a Bowie rip, after that comes a strictly inferior version of this, and everything after that REALLY blows.

Good album, however I preferred his début.

Enjoyable at the beginning and at some pieces around the work like the self title, but, for me, was really preachy listen to the whole. Funny that at end sounds like some pop stuff due the repetition. Good album, but not enough to another listening, though.

This album stays interesting in it's entirety. It feels like a great meeting of minds: Marilyn Manson, Jeordie White, and Trent Reznor. I would've hoped they would have continued this sort of marriage, but there was apparently more going on behind the scenes and this would be the last of that.

Get past all the fuss about this guy's theatrics and image, and the music isn't actually that bad. It's a great marriage between industrial and metal, and Marylin Manson is a standout front man. Not bad, but a little inconsistent. Get the compilation.

The first two tracks, "irresponsible hate anthem" and "beautiful people", along with the title track, NAIL his sound -- sin, god & rock'n'roll. He does what alice cooper did before him but perverts the idea a little more. All tracks feel grimy and filthy, a sound made possible by the grinding guitars and dirty synth tracks in almost every song. With song titles like "wormboy", "angel with the scabbed wings" and "dried up, tied up and dead to the world", this would've been the soundtrack to movies like Saw and their ilk if he released it years later.

Your feedback for Antichrist Superstar