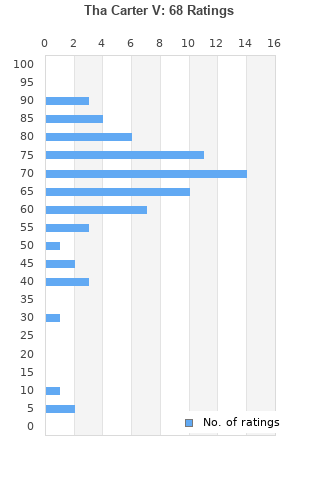 Lil Wayne - Tha Carter V (NEW 2CD)
Condition: Brand New
Time left: 1d 1h 30m 49s
Ships to: Worldwide
£12.55
Go to store
Product prices and availability are accurate as of the date indicated and are subject to change. Any price and availability information displayed on the linked website at the time of purchase will apply to the purchase of this product.  See full search results on eBay

Tha Carter V is ranked 5th best out of 18 albums by Lil Wayne on BestEverAlbums.com.

The best album by Lil Wayne is Tha Carter III which is ranked number 2663 in the list of all-time albums with a total rank score of 582. 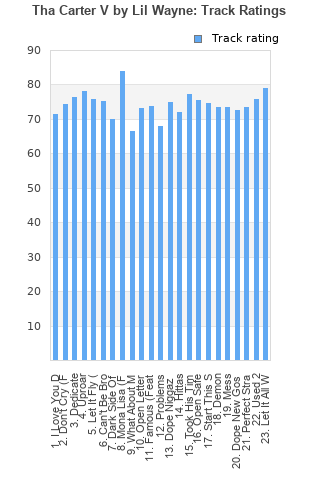 Rating metrics: Outliers can be removed when calculating a mean average to dampen the effects of ratings outside the normal distribution. This figure is provided as the trimmed mean. A high standard deviation can be legitimate, but can sometimes indicate 'gaming' is occurring. Consider a simplified example* of an item receiving ratings of 100, 50, & 0. The mean average rating would be 50. However, ratings of 55, 50 & 45 could also result in the same average. The second average might be more trusted because there is more consensus around a particular rating (a lower deviation).
(*In practice, some albums can have several thousand ratings)
This album has a Bayesian average rating of 69.3/100, a mean average of 66.6/100, and a trimmed mean (excluding outliers) of 68.6/100. The standard deviation for this album is 16.3.

Wayne had his time and his time has passed. This is not a good album. None of the songs are recognizable to me apart from some of the crappy hooks. Mona Lisa is nothing special, it's a typical rap ballad that features a hysterical Kendrick Lamar with a much less flattering effort than something along the likes of "u". It also irks me that after an hour of listening we are introduced to a song called "Start This Shit Off Right".

Wayne pulls a Drake and fills a 90-minute album with a bunch of fillers. There is some good tracks on here that prove he still knows how to rap, but in the end, it's a boring/inoffensive trap album.

Thoroughly enjoyable and consistent album. There's really no bad tracks on here. At moments, it gives the fan exactly what they want, yet Lil Wayne still matures as a songwriter. The lyrics are always charismatic, eccentric, and interesting. Lots of memorable moments on here. The production as well as Wayne himself have so much energy.
Some of the clear highlights to me are: Uproar, Let it Fly, Can't Be Broken, Mona Lisa, Open Letter, Famous, Dope N****z, Open Safe, Dope New Gospel, Used To, and Let It All Work Out
In fact, the only track that I didn't get any enjoyment out of were What About Me and Problems. Everything else had so much replay value.

Your feedback for Tha Carter V