Everywhere At The End Of Time (compilation album) by The Caretaker 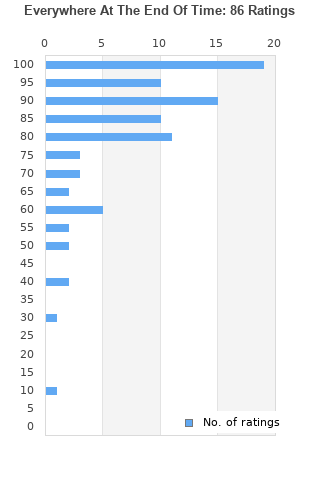 CARETAKER, The - Everywhere At The End Of Time - Stages 4-6 - CD (4xCD)
Condition: Brand New
Time left: 23d 23h 53m 9s
Ships to: Worldwide
£31.22
Go to store
Product prices and availability are accurate as of the date indicated and are subject to change. Any price and availability information displayed on the linked website at the time of purchase will apply to the purchase of this product.  See full search results on eBay

Everywhere At The End Of Time is ranked 2nd best out of 15 albums by The Caretaker on BestEverAlbums.com.

The best album by The Caretaker is An Empty Bliss Beyond This World which is ranked number 1955 in the list of all-time albums with a total rank score of 855.

Listen to Everywhere At The End Of Time on YouTube 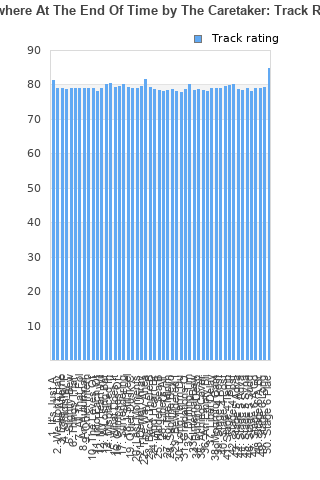 0
6.
Things That Are Beautiful And Transient
Rating: 76 (4 votes)Comments:

Everywhere At The End Of Time rankings

Everywhere At The End Of Time collection

Everywhere At The End Of Time ratings

Rating metrics: Outliers can be removed when calculating a mean average to dampen the effects of ratings outside the normal distribution. This figure is provided as the trimmed mean. A high standard deviation can be legitimate, but can sometimes indicate 'gaming' is occurring. Consider a simplified example* of an item receiving ratings of 100, 50, & 0. The mean average rating would be 50. However, ratings of 55, 50 & 45 could also result in the same average. The second average might be more trusted because there is more consensus around a particular rating (a lower deviation).
(*In practice, some albums can have several thousand ratings)
This album is rated in the top 2% of all albums on BestEverAlbums.com. This album has a Bayesian average rating of 79.0/100, a mean average of 80.4/100, and a trimmed mean (excluding outliers) of 80.4/100. The standard deviation for this album is 20.2.

Everywhere At The End Of Time favourites

Everywhere At The End Of Time comments

The opening of his breakthrough album, 2011’s An Empty Bliss Beyond This World, displays the unease characteristic of James Kirby’s work in the transition between ‘Libet’s Delay’ and ‘I Feel As If I Might Be Vanishing’. Whilst the former maintains its jaunty, optimistic tone despite its cloud of muddying distortion, this optimism is rendered obsolete by the haunting despondency of the latter, whose pained string section is barely able to bat away the persistent drone of an amplifier and the crackle of vinyl.

This structure, writ large, is the format of Everywhere At The End Of Time. All the tracks in stages 1-3 stay recognisable forms of their original samples and it’s only as we start to push the two-hour mark that the vinyl crackles begin to show. This self-imposed stylistic debt is no cynical jab for nostalgia akin to Postmodern Jukebox’s vintage-reworked pop. Neither, however, does Kirby ever allow us to be situated in an era familiar to us. These aren’t the recordings of Ella Fitzgerald or Billie Holiday, these are songs that the passage of time has rendered discarded, forgotten. Well, not quite forgotten; their re-animated form casts us in the uncomfortable role of time-travelling voyeur, as if taking a peek inside someone else’s long-lost memory.

The self-examination of this voyeurism is something that as a listener one would hope the series is conscious of, though accusations of Kirby romanticizing a terminal illness prove hard to knock when his liner notes liken the early onset of dementia to a “beautiful daydream”. Writing for Pitchfork in his review of 2016’s Stage 1, Brian Howe incisively begged the question of “why should we want to experience dementia by proxy, aesthetically, or even think that we can?”. Where An Empty Bliss… evoked abstract notions of past and memory by keeping its subjects at arms length, Everywhere… suffers in its reliance on our morbid fascination at human mortality, without any of its underlying humanity. We stand staring at a diorama of a car-crash, safe in the knowledge that it’s an artistic creation.

It is in stages 4-6, when the pretence of documenting the degenerative process gives way to the degeneration itself, that the series finds firmer footing. Gone is any lingering sense of kitsch, compositions are now harsh and abrasive. Though by resorting to the complete immolation of his original samples, Kirby subscribes to the icy futurism of other contemporary ambient artists that had been a counterpoint to his work. Its final five minutes demonstrates the commitment to aesthetics over realism, when an admittedly beautiful choral sample following an hour of static contravenes the series’ guiding concept of gradual decay. Kirby presumably does this to avoid an anticlimactic end to his series, conveniently passing over the lack of an aestheticised end to real dementia.

It’s here that we see the place of the series’ creation in its refusal to engage with the kind of oblivion that death really entails. Beyond any sense of commemoration, or even empathy, its primary concern is fear. There is no doubt that in setting finite parametres to the series, Kirby has created a potent sense of dread at its end, never before listening to a piece of music have I been so keenly aware of its finite nature. Nevertheless, Everywhere… still finds itself more interested in the destruction of The Caretaker persona than the pain that accompanies real human destruction.

This is a condensed version of an article I wrote for my blog. You can read the full version here:: https://sidfranklyn1.wixsite.com/foregroundnoise/post/review-the-caretaker-everywhere-at-the-end-of-time-stages-1-6

Truly one of a kind, I can't think of any kind of art similar to this, and I think it's quite beautiful. It's bittersweet, and sad, it takes you through a lot, and the end explores your inner fragility with such sadness it's fantastic. Rationally challenging, an emotional odyssey.

Listening to this monstrous conceptual masterpiece needs to be done as close to one listen as possible. Considering its length this is very difficult, but I listened to the whole thing over the span of a day, and it made me reconsider what reality might be. I felt like I started to lose my mind a bit by the end of it.

This is probably the only album or set of albums that I don't want to touch. Not because it's bad. No, far from the contrary. Listening to some snip-its from this are quite jaw dropping on how potent they are. But for people who know what this album is about, there is something that feels uncanny about this that terrifies me. And for newcomers that are reading this comment wondering what the hell I'm talking about, read what this is about, listen to songs like the last song of section 2 as well as the second half and you will know true fear.

Just had to get that off my chest. The more I think about it, the more depressed I get.

Your feedback for Everywhere At The End Of Time