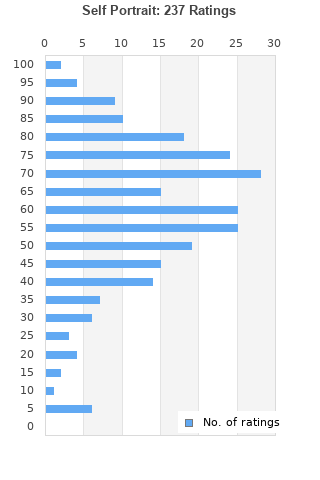 Self Portrait is ranked 35th best out of 74 albums by Bob Dylan on BestEverAlbums.com.

The best album by Bob Dylan is Highway 61 Revisited which is ranked number 26 in the list of all-time albums with a total rank score of 36,269.

Tickets from Ticketmaster Get tickets
May
28
Sat
21:00 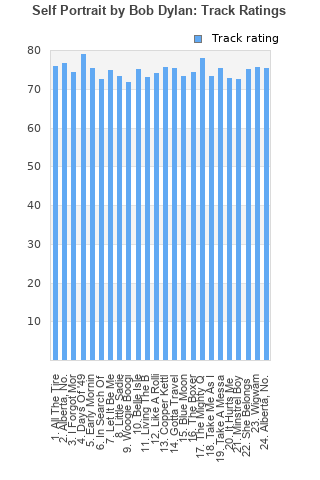 Rating metrics: Outliers can be removed when calculating a mean average to dampen the effects of ratings outside the normal distribution. This figure is provided as the trimmed mean. A high standard deviation can be legitimate, but can sometimes indicate 'gaming' is occurring. Consider a simplified example* of an item receiving ratings of 100, 50, & 0. The mean average rating would be 50. However, ratings of 55, 50 & 45 could also result in the same average. The second average might be more trusted because there is more consensus around a particular rating (a lower deviation).
(*In practice, some albums can have several thousand ratings)
This album has a Bayesian average rating of 60.0/100, a mean average of 59.5/100, and a trimmed mean (excluding outliers) of 59.5/100. The standard deviation for this album is 20.1.

Reading about this record you might get the idea it’s some misunderstood masterpiece but don’t be mistaken, don’t fool for it and waste your time here. Dylan covers a bunch of so-so country tunes in that annoying Nashville skyline voice for what feels like forever. It’s not even fun like that record was it’s just draining to get through. AVOID!

Oh my god. What on earth? This is a truly poor album, and easily the worst I've heard from the great man.

These ain’t songs for the Village. There are songs for the backroads of Kentucky. The ultimate 70s AM radio station curated by Dylan himself. This was not some tossed off project. This was not a Fuck You. This was a tribute to the music that Dylan loved that maybe didn’t get so much critical acclaim. It’s essentially like listening to the best damn juke box at some dive bar in eastern Kentucky circa 1974. Songs made for taking it easy while cruising down the highway or belting back some beers. Dylan LOVED these songs. And I do too.

Grade: A. I consider this an essential Dylan album showing yet another side to the enigmatic bard. This is 70s AM radio at its best with great variety which he nails more often than not. Some people would prefer to whittle this down to a single album, but I love it just the way it is. Warts and all. Radio stations back then were messy affairs after all. You just never knew what you were going to get. Far more often than not he nails them. And some of my favorite Dylan songs such as “All the Tired Horses”, “Take Me As I am” and “It Hurts Me too” are on here. Dylan had a love for all kinds of music and that is completely on display here. More so than perhaps any of his other albums. And he plays these songs with conviction and heart. Well except when covering his own “Like a Rolling Stone”. lol. But he more than makes up for it with his rendition of “She Belongs to Me” which showed me that their was a sonic link between Dyan and the Velvet Underground which I had never picked up on before. Long live 70s AM radio!

The oddball in Dylan's career(and that's saying something). A double album of cover versions, live tracks, and a handful of originals and traditionals. It certainly is all over the place, with the feel of a bootleg album about it. Greil Marcus'"what is this shit"? headline in Rolling Stone in 1970 seems a little harsh in retrospect but it was perfectly justified at the time. It is an incredibly lazy record. Still, let's be honest, Dylan was past his best at this point, his last album before this was the enjoyable but lightweight, Nashville skyline, so he was well past his stellar 1963-1966 period. Still, Self portrait, does feel like a "fuck you" to someone. His record company? Albert Grossman? Us? His version of Simon and Garfunkel's, the boxer, is intentionally sloppy, double tracked by Dylan to represent a 'duet', and, Blue moon, is equally bad. Still, with the release of, Another self portrait, the tenth in the bootleg series, it reveals, with minus the syrupy strings, there's a decent album in there with some fine sincere performances. It's all academic at the time though, it's obvious Dylan did'nt give a toss at this point. Or maybe he did slightly regret it given the hasty release of, New morning, just four months later. Self portrait, is certainly not an essential Dylan album, but it is another piece of the enigmatic puzzle that is Zimmerman.

Now I love Bob Dylan and I can understand that at the time this album was considered a let down. I mean trying to top yourself all the time is a lot of pressure. Mr. Dylan himself said this record was a "screw you guys" response to all the hype and all the critics. That said I think it's a refreshing departure from his previous material. It's got more gems than duds. The man can't be brilliant all the time.

Absolutely underrated, this one. Not to mention the very ill-deserved statement from that one critic at the time - "What is this shit?". This album is anything but that. I was absolutely, and I must say, very pleasantly surprised with its impact on me. Right from the beginning, through to the end, this album is unpredictable! And correct me if I'm wrong, but isn't that exactly the key descriptive word most musicians are striving for? I think so...

Also, (Just one more thing) to help with its impeccable length ('Cause let's face it, it can seem a little long at times), may I suggest the simple removal of some of its weaker tracks, such as the Isle of Wight concert material. This listing below, I feel, best represents the brilliance of this album.

Time has shown us the initial reaction was overblown and wrong. This really isn't a bad album. It's actually quite good.

That said, this is a definite step down from basically everything he released in the 60s. COMPARATIVELY it is a let down. But if you go into this thing with an open mind you can actually find A LOT to like and even love about this record.

For one, this album is completely ego-free. It's relaxed and it just doesn't feel like anyone involved is trying too hard to impress. The result is a mishmash of some quite good and some not so good moments. This is a good record. It's not something to pay painstaking detailed attention to. It's just a fun and enjoyable lil album.

An interesting thing about this record is there are literally no absolute stand outs here. There are no Dylan classics. But the album for all it's ramshackle vibes is pretty consistent. Every time there is a clunker of sorts it's followed up by a very good track. And even the bad tracks take themselves so un-seriously that you find yourself smiling with mild pleasure while listening to them.

The album itself is a nice Americana mix of blues, folk, country, honky-tonk, rock and roll, along with some things that are just silly and unique. The opener "All The Tired Horses" is an example of that last. And also here is quite a good cover of himself (how enjoyably pathetic) with "Like A Rolling Stone" and a cover of Paul Simon's "Boxer"... Also kinda pathetic, but not really enjoyable.

His voice switches between the vocal style from his mid 60s work and his country-fied croon of "Nashville Skyline". It's actually pretty awesome throughout. Dylan is a great vocalist. Fuck y'all who disagree. ;)

All in all this is a pretty good record that is a bit too long.

I don't understand how people still manage not to like this record. In 1970, I get it. People weren't yet entirely hip to the idea that this guy was just going to drastically switch directions if he felt like it, but knowing what we know now I'd think you would just judge it on its merits. As a matter of fact this is currently ranked at #73 in 1970 while the OST of Jesus Christ Superstar is #51. Unacceptable.

A strange collection that contains a few gems.

Your feedback for Self Portrait