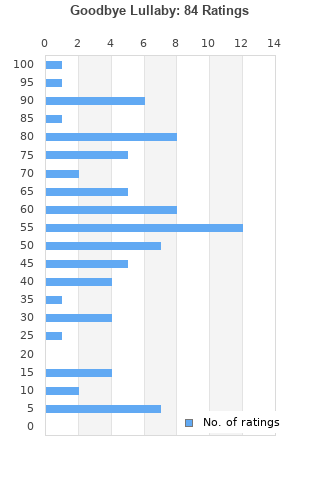 Avril Lavigne : Goodbye Lullaby CD
Condition: Very Good
Time left: 8h 19m 39s
Ships to: Worldwide
$5.00
Go to store
Product prices and availability are accurate as of the date indicated and are subject to change. Any price and availability information displayed on the linked website at the time of purchase will apply to the purchase of this product.  See full search results on eBay

Goodbye Lullaby is ranked 4th best out of 8 albums by Avril Lavigne on BestEverAlbums.com.

The best album by Avril Lavigne is Let Go which is ranked number 1571 in the list of all-time albums with a total rank score of 1,108. 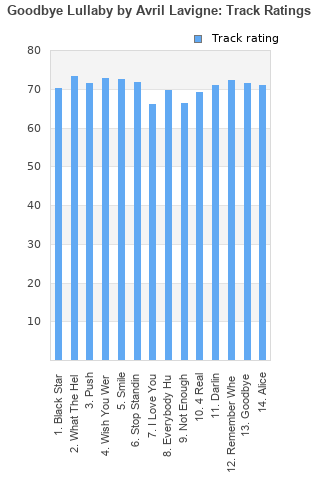 Rating metrics: Outliers can be removed when calculating a mean average to dampen the effects of ratings outside the normal distribution. This figure is provided as the trimmed mean. A high standard deviation can be legitimate, but can sometimes indicate 'gaming' is occurring. Consider a simplified example* of an item receiving ratings of 100, 50, & 0. The mean average rating would be 50. However, ratings of 55, 50 & 45 could also result in the same average. The second average might be more trusted because there is more consensus around a particular rating (a lower deviation).
(*In practice, some albums can have several thousand ratings)
This album has a Bayesian average rating of 55.0/100, a mean average of 52.7/100, and a trimmed mean (excluding outliers) of 52.7/100. The standard deviation for this album is 25.4.

I consider this as good as "The best damn thing", but definitely inferior to "Let go".

There are so many lazy, cliched lyrics and "la las" on this album, an album that sees Avril lose some punk edge (on what was basically pop), maybe looking to present a more grown up image. Not that her earlier works were great albums, but she (and her other writers) don't seem to be trying.

It makes me so sad the way this album got treated. Its so personal and honest and the melodies are all perfect.

Underrated. For me, the highlight is the 1-2-3 punch of "Stop Standing There", "I Love You", and "Everybody Hurts".

Very good pop-rock album. Best 5 songs average is 87/100, album gets 90/100. It's a comparetively soft album by Avril. And songs sound bit over-perfect with polyphonic vocals etc. However I like Avril Lavigne. Best songs are "Push" and "Everybody hurts" both 90/100. Nearly every other song is 85/100. Notable is hidden track "Alice" as slight below-average.

I listened to it because of Applerill's recommendation. I would never see it as a classic, but I did enjoy it, and there weren't any bad tracks.

Some nice songs here and I like the overall feel of the album. A job well done.

The Radio Disney equivalent to Blood on the Tracks or (GASP!!) Pet Sounds. It's that amazing, and is certainly one of the best albums of the year. I'm currently finishing up a review of this album.

Your feedback for Goodbye Lullaby