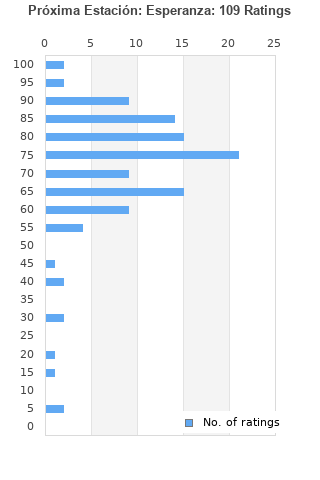 Próxima Estación: Esperanza is ranked 2nd best out of 7 albums by Manu Chao on BestEverAlbums.com.

The best album by Manu Chao is Clandestino which is ranked number 1726 in the list of all-time albums with a total rank score of 995. 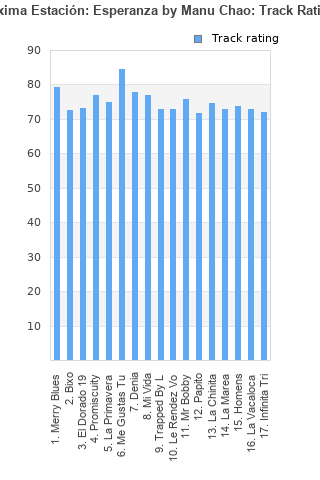 Rating metrics: Outliers can be removed when calculating a mean average to dampen the effects of ratings outside the normal distribution. This figure is provided as the trimmed mean. A high standard deviation can be legitimate, but can sometimes indicate 'gaming' is occurring. Consider a simplified example* of an item receiving ratings of 100, 50, & 0. The mean average rating would be 50. However, ratings of 55, 50 & 45 could also result in the same average. The second average might be more trusted because there is more consensus around a particular rating (a lower deviation).
(*In practice, some albums can have several thousand ratings)
This album has a Bayesian average rating of 73.1/100, a mean average of 71.3/100, and a trimmed mean (excluding outliers) of 73.1/100. The standard deviation for this album is 17.6.

It's what happens if you mix Buena Vista Social Club-style Latin music, Madonna-style EDM, and Bob Marley-style reggae. A little less punk and experimental than the debut but possibly more consistent. Definitely evokes the "Euro-party". My favorites include Me Gustas Tu, Trapped by Love, and La Marea.

Trapped by Love and Me Gustas Tu are great new grooves. The reuse of the Bonga Bong groove for Mr Bobby and Homens is a little weird. A little less revolutionary than the debut.

Strictly speaking there's only one strong musical theme (that reggae groovy rythmic motive with a high pitched note that falls like a teardrop) wich is everywhere on the album as it lays the foundation of at least 5 tracks. That repeated groove and the radiostation samples give the album a strong unity and a very good flow.

This album is never disappointing. 100/100 for originality and creativity.

My mood instantly improves after sticking Manu Chao on. Must buy (1st album) Clandestino. Favourite songs from this one- Merry Blues, Me Gustas Tu and Mr. Bobby

This album is a great collage of music in different languages mixed with audio bites from Latin American or Spanish radio. It all flows very well and the music and lyrics reflect the personality and ideas of Manu Chao, who besides having a rock-punk-ska musical background, also embraces Latin American rhythms and culture. I think this album should be in the Top 30 of any chart list, if more Anglo Saxon people would be interested in listening to music in other languages. "Mi Vida", "Me Gustas Tú" and "Mr. Bobby" are my 3 favourite songs.

Your feedback for Próxima Estación: Esperanza