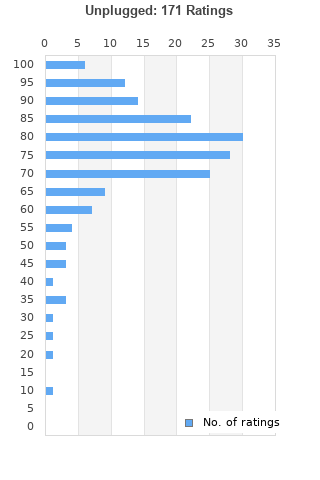 Neil Young - Preowned 3 CD Lot Harvest Moon - Unplugged -Living With War
Condition: Very Good
Time left: 2h 31m 8s
Ships to: Worldwide
$9.99
Go to store
Product prices and availability are accurate as of the date indicated and are subject to change. Any price and availability information displayed on the linked website at the time of purchase will apply to the purchase of this product.  See full search results on eBay

Unplugged is ranked 14th best out of 79 albums by Neil Young on BestEverAlbums.com.

The best album by Neil Young is After The Gold Rush which is ranked number 77 in the list of all-time albums with a total rank score of 19,262. 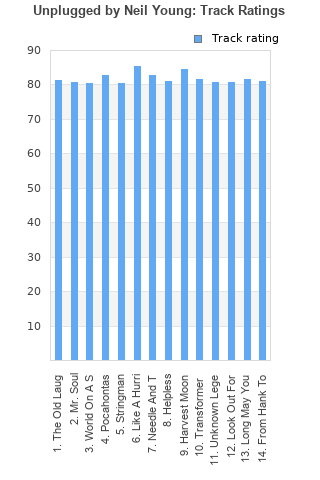 Rating metrics: Outliers can be removed when calculating a mean average to dampen the effects of ratings outside the normal distribution. This figure is provided as the trimmed mean. A high standard deviation can be legitimate, but can sometimes indicate 'gaming' is occurring. Consider a simplified example* of an item receiving ratings of 100, 50, & 0. The mean average rating would be 50. However, ratings of 55, 50 & 45 could also result in the same average. The second average might be more trusted because there is more consensus around a particular rating (a lower deviation).
(*In practice, some albums can have several thousand ratings)
This album is rated in the top 7% of all albums on BestEverAlbums.com. This album has a Bayesian average rating of 76.3/100, a mean average of 75.0/100, and a trimmed mean (excluding outliers) of 76.5/100. The standard deviation for this album is 16.2.

A good mix of songs, I haven't seen the video. Highlights for me are Pocahontas, Like A Hurricane, Harvest Moon, Transformer Man and From Hank To Hendrix.

Neil Young's Unplugged performance comes at a good time in his career when Harvest Moon was just released and he was performing with The Stray Gators. The first half of this show has Neil playing acoustically on his own and the band joins in for the back half. There's a good variety of tracks in the set. Some have the usual arrangement while others get punched up in order to work acoustically. I'd consider most of the Harvest Moon tracks to be standouts as well as Long May You Run, Like a Hurricane and Helpless.

Worth it for the gorgeous version of helpless alone.

I like this album. Mr. Young plays some old stuff and newer material that makes a nice mix. His voice is maturing and his phrasing has matured also. A solid record.

Disappointing record. Neil is not on top on this one.

Your feedback for Unplugged