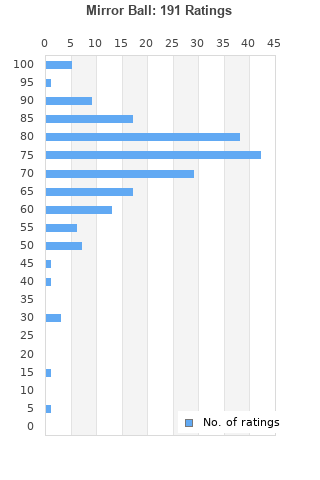 Mirror Ball by Neil Young (CD, Jun-1995, Warner Bros.)
Condition: Brand New
Time left: 7h 18m 3s
Ships to: Worldwide
$38.00
Go to store
Product prices and availability are accurate as of the date indicated and are subject to change. Any price and availability information displayed on the linked website at the time of purchase will apply to the purchase of this product.  See full search results on eBay

Mirror Ball is ranked 11th best out of 77 albums by Neil Young on BestEverAlbums.com.

The best album by Neil Young is After The Gold Rush which is ranked number 76 in the list of all-time albums with a total rank score of 19,558. 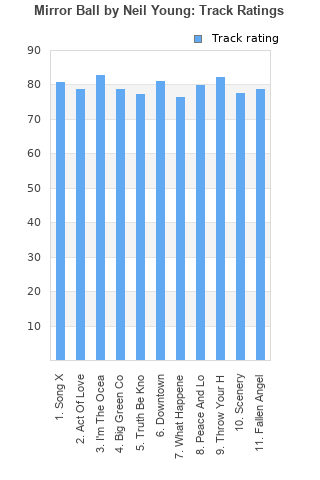 Rating metrics: Outliers can be removed when calculating a mean average to dampen the effects of ratings outside the normal distribution. This figure is provided as the trimmed mean. A high standard deviation can be legitimate, but can sometimes indicate 'gaming' is occurring. Consider a simplified example* of an item receiving ratings of 100, 50, & 0. The mean average rating would be 50. However, ratings of 55, 50 & 45 could also result in the same average. The second average might be more trusted because there is more consensus around a particular rating (a lower deviation).
(*In practice, some albums can have several thousand ratings)
This album has a Bayesian average rating of 74.1/100, a mean average of 72.9/100, and a trimmed mean (excluding outliers) of 74.2/100. The standard deviation for this album is 13.4.

Mirror Ball is loud and blown out (all thanks to Young’s choice of backing band for the project, Pearl Jam), like a mini Ragged Glory. It’s not nearly as great, but it still has its moments (Downtown, Peace and Love, Throw Your Hatred Down). I did expect a little more from Pearl Jam as they were known for being energetic and they're playing is a little rudimentary here.

Not necessary to the listening experience, but I recommend attaching Pearl Jam's Merkin Ball EP to the end of this when listening digitally. It's a nice little addition.

Pleasantly surprised after revisiting this one after many decades.

It's not bad, although a little samey. You really want Pearl Jam to explode but they just kind of competently chug along. It's okay, but nothing really stands out. Not bad.

One of the best of the Neil '90 era.
Pearl Jam at their best with Jack Irons.
Some copyright problems (PJ doesn't apper on the credits!)

That`s a good album with nice songs.
It has just one problem: neil Young did lot`s of good albums and i listen to this one very rarely.

This album was fun to listen to. Strong melodies and music, and while not much besides "I'm the Ocean" is remarkable, I still found it to be a great experience.

It's the grungy element that I love. Crazy Horse are great but Pearl Jam really take it to another place on this album.

Don't agree with other comment. Can't get into this and I think its down to the soulless backing. Tight as hell but lacking that spark. Just like pearl jams back catalogue. Give me crazy horses amateur playing anyday over this lot.

A great album made with one of the best backing bands that Neil has ever worked with.

Your feedback for Mirror Ball