After Bathing At Baxter's (studio album) by Jefferson Airplane 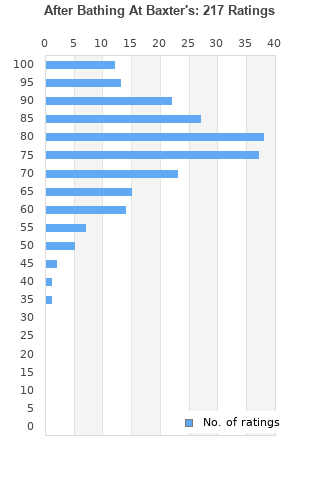 After Bathing At Baxter's is ranked 2nd best out of 23 albums by Jefferson Airplane on BestEverAlbums.com.

The best album by Jefferson Airplane is Surrealistic Pillow which is ranked number 326 in the list of all-time albums with a total rank score of 5,841. 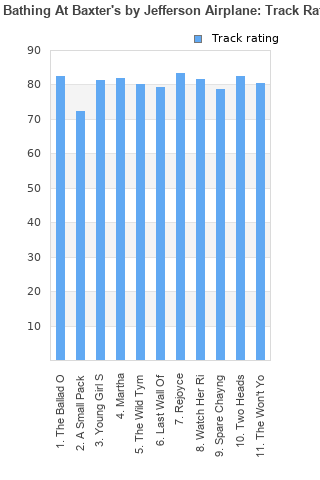 #
Track
Rating/Comments
1.
The Ballad Of You And Me And Pooneil
Rating: 83 (57 votes)Comments:

After Bathing At Baxter's rankings

After Bathing At Baxter's collection

After Bathing At Baxter's ratings

Rating metrics: Outliers can be removed when calculating a mean average to dampen the effects of ratings outside the normal distribution. This figure is provided as the trimmed mean. A high standard deviation can be legitimate, but can sometimes indicate 'gaming' is occurring. Consider a simplified example* of an item receiving ratings of 100, 50, & 0. The mean average rating would be 50. However, ratings of 55, 50 & 45 could also result in the same average. The second average might be more trusted because there is more consensus around a particular rating (a lower deviation).
(*In practice, some albums can have several thousand ratings)
This album is rated in the top 4% of all albums on BestEverAlbums.com. This album has a Bayesian average rating of 77.3/100, a mean average of 77.3/100, and a trimmed mean (excluding outliers) of 77.5/100. The standard deviation for this album is 12.8.

After Bathing At Baxter's favourites

After Bathing At Baxter's comments

I was expecting a lot more from this release and I think it is a tad over rated in how psychedelic it is. While there are some very psychedelic moments on songs like Spare Chaynge, which sounds extremely heavy, it just isn't maintained throughout the whole record. The consistency is what drags this album down as there is quite a bit of filler on this release and that can make it uninteresting at times. I was also expecting a bit more experimentation like on Surrealistic Pillow and that just isn't there for me as quite a few songs sound relatively simple. However, some songs are instant JA classics and make this album worthwhile just to find those tracks to listen to later. Overall, this isn't there strongest release but has its moments where it is great but they just don't maintain that.

I am exactly the person this album was aimed at, and it got me right between the eyes-- or ears.

My absolute favourite Airplane album, a Psychedelic masterpiece to lose yourself within. One of my top ten psychedelic albums where you hear more with each listen.

A metaphysical epic of life and love. This is a psychedelic masterpiece and highly underrated it seems. I find it hard to find anything, besides the skit-like track after the opener, that is less than incredible. I'm pretty sure "Watch Her Ride" is one of the best songs I've ever heard, no hyperbole. Just incredible, front to back.

I tried not to be biased because of the album name. I also just found out that "Pooneil" is Fred Neil, which is amazing.

For better or worse, the most definitive, genre-identifying "acid rock" album ever made.

And as a final note, Jack Casady's bass playing here is some of the best in all of rock music.

For me, not as great as surrealistic pillow. It has some great songs that are at the SP level, but has some filler. It's greatly underrated, anyway.

Good, but not nearly as perfect as Surrealistic Pillow. Has some good songs, specially Young Girl S.B. It's worth a listen and, if you like it, you'll find yourself coming back to it every now and then.

This is an even more psychedelic record than, surrealistic pillow. After bathing at Baxters, goes the whole LSD hog. It's extremely messy but it is a lot of fun and there are some good songs, especially, Martha, rejoice, and, spare chaynge. Uneven and inconsistent but repeated listens brings out the songs and sounds.

Your feedback for After Bathing At Baxter's