Boxer (studio album) by The National 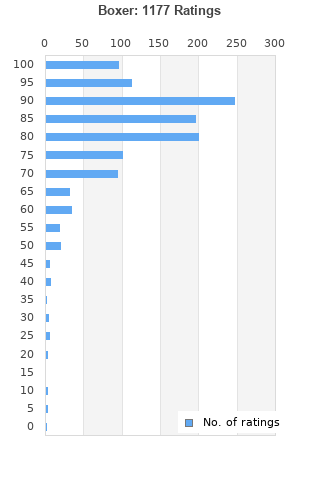 Boxer is ranked 2nd best out of 13 albums by The National on BestEverAlbums.com.

The best album by The National is High Violet which is ranked number 134 in the list of all-time albums with a total rank score of 12,572. 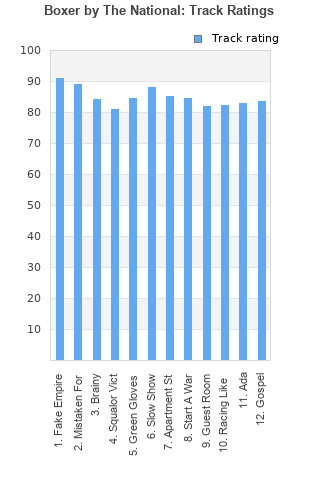 Rating metrics: Outliers can be removed when calculating a mean average to dampen the effects of ratings outside the normal distribution. This figure is provided as the trimmed mean. A high standard deviation can be legitimate, but can sometimes indicate 'gaming' is occurring. Consider a simplified example* of an item receiving ratings of 100, 50, & 0. The mean average rating would be 50. However, ratings of 55, 50 & 45 could also result in the same average. The second average might be more trusted because there is more consensus around a particular rating (a lower deviation).
(*In practice, some albums can have several thousand ratings)
This album is rated in the top 1% of all albums on BestEverAlbums.com. This album has a Bayesian average rating of 82.5/100, a mean average of 81.5/100, and a trimmed mean (excluding outliers) of 82.6/100. The standard deviation for this album is 14.4.

This is my first extended listen to The National. A bit slow, although I liked the vibe overall. I suspect that with more time to dig in to the lyrics, I’d rate this higher.

This was my first delve into The National a few years ago - I like his tone and delivery (I also love Iggy Pop/Lou Reed - perhaps because I can't sing?). I loved this album from the opening track I got into the band nearly 20 years after they formed. But that's okay as you then have a back catalogue to quickly digest and are not pulled in by any razzamatazz but rather just a love for the sound. I did manage to catch them in concert which was a surprise and great.

The vocalist has only a tad narrow range and monotonous vibe. Songs sound familiar and mostly likable. Does non impress much, though? The piano was a fav instrument on many albums of the period and it gets boring when used constantly.

This album in the most consistently great album that the National have released. Every song is impressive and feels important to the overall flow of the album. I think the vocals perfectly match the instrumentation and match the feel of the record and makes the album feel cohesive. The vast range of instruments played gives the album a more grand feel to it as well and allows you to explore the songs multiple layers. The album can feel a little slow at times and considering the 43 minute run time that shouldn't really be the case. Overall the album is worth exploring but it won't be an album that everyone falls in love with.

Best The National album that I've heard so far.

There was a time I absolutely adored this album. It still holds up reasonably well.

Your feedback for Boxer