Wincing The Night Away (studio album) by The Shins 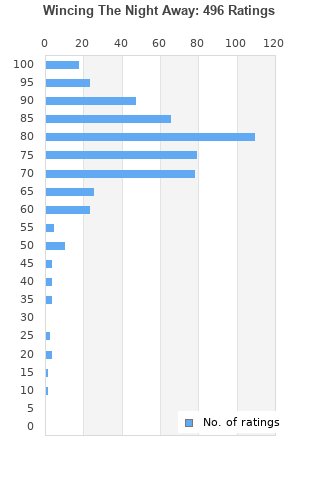 Wincing The Night Away is ranked 3rd best out of 6 albums by The Shins on BestEverAlbums.com.

The best album by The Shins is Chutes Too Narrow which is ranked number 346 in the list of all-time albums with a total rank score of 5,476. 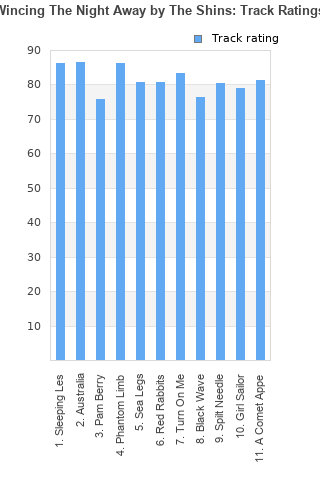 Wincing The Night Away rankings

Wincing The Night Away collection

Wincing The Night Away ratings

Rating metrics: Outliers can be removed when calculating a mean average to dampen the effects of ratings outside the normal distribution. This figure is provided as the trimmed mean. A high standard deviation can be legitimate, but can sometimes indicate 'gaming' is occurring. Consider a simplified example* of an item receiving ratings of 100, 50, & 0. The mean average rating would be 50. However, ratings of 55, 50 & 45 could also result in the same average. The second average might be more trusted because there is more consensus around a particular rating (a lower deviation).
(*In practice, some albums can have several thousand ratings)
This album is rated in the top 4% of all albums on BestEverAlbums.com. This album has a Bayesian average rating of 77.5/100, a mean average of 76.5/100, and a trimmed mean (excluding outliers) of 77.6/100. The standard deviation for this album is 13.5.

Wincing The Night Away favourites

Wincing The Night Away comments

The highs on this album are amazing and the opening trio of Sleeping Lessons, Australia and Phantom Limb is one of their best starts to an album ever. Every song is unique and different and that makes for a very interesting listen and I find it very difficult to even be slightly bored while playing this record. Lyrically, it is very strong and gives us a lot to explore and they always match up very well with the melodies on each song. However, there are a few tracks which are closer to filler and they don't really have the musical quality of the other songs. Overall, it isn't as good as their other releases but it is closer than people give it credit for and it has a lot of brilliant moments on here.

The highs are among the best songs the band has ever made! The lows are very middling. I feel like Sea Legs could be cut down by a minute. Phantom Limb, though lyrically great, is musically tedious. The album feels more produced than the previous two, but it also feels the most alternative than just indie.

Doesn't have the impact of the first 2 albums. Builds on the same style that the Shins have adopted but doesn't introduce anything radically new or different. If this had been their first album I might well have thought it the best but it isn't and therefore I don't. The songs are consistently good throughout but like all Shins albums the best is front ended. Sleeping Lessons, Australia and Phantom Limb being closely followed by Sealegs. (Sounds like a horse race commentary).
This album was supposed to be more musically diverse and experimental than the previous two but this objective was never set high enough as the end result was never going to change the world.
Maybe James Mercer thought the same as the group was disbanded shortly after, later to be reformed with different personnel

Not as strong as the previous albums, but has a few good songs.

Somewhere between Brian Wilson and Morrissey with the lyrics for me.

Less well-regarded by most Shins fans. Still, this was my first and probably my second-favorite. A Comet Appears makes the entire album.

My least favorite Shins album. Given I really like the other three, I don't mean it in a bad way, it's just not as strong. It has way too many songs that are just decent, it's nice to listen to (after all, it's the Shins), but every time I listen to it I feel like it has too much filler

There are some great songs in it though, Australia and Phantom Limb are excellent, and Turn on Me and Spilt Needles are pretty good

Good album!
Nothing really stands out too much, but there are no inverses either.

extremely underrated in my opinion.. every song is memorable and important

Your feedback for Wincing The Night Away