In Rainbows (studio album) by Radiohead 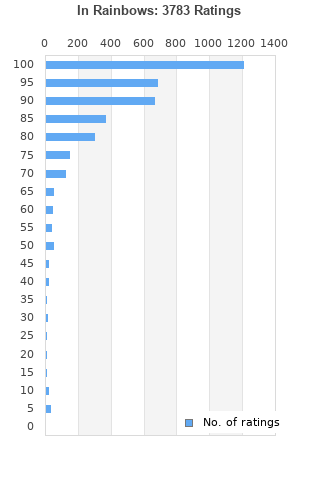 In Rainbows is ranked 3rd best out of 22 albums by Radiohead on BestEverAlbums.com.

The best album by Radiohead is OK Computer which is ranked number 1 in the list of all-time albums with a total rank score of 92,662. 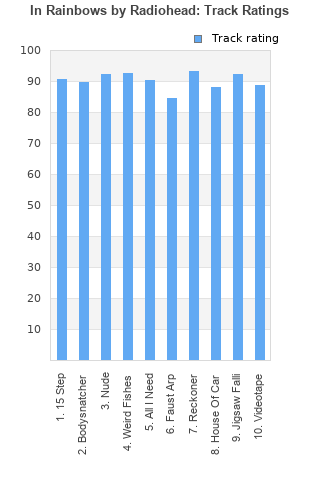 Rating metrics: Outliers can be removed when calculating a mean average to dampen the effects of ratings outside the normal distribution. This figure is provided as the trimmed mean. A high standard deviation can be legitimate, but can sometimes indicate 'gaming' is occurring. Consider a simplified example* of an item receiving ratings of 100, 50, & 0. The mean average rating would be 50. However, ratings of 55, 50 & 45 could also result in the same average. The second average might be more trusted because there is more consensus around a particular rating (a lower deviation).
(*In practice, some albums can have several thousand ratings)
This album is rated in the top 1% of all albums on BestEverAlbums.com. This album has a Bayesian average rating of 89.5/100, a mean average of 87.9/100, and a trimmed mean (excluding outliers) of 89.5/100. The standard deviation for this album is 16.4.

Absolutely incredible album. I find putting this on is a great way to escape reality for a while and just get lost in the world Radiohead seem to have created.

The album title really reflects the experience you have when listening to In Rainbows, it truly is colourful and wondrous. It is the perfect blend of all of their recent projects and is perhaps their most rewarding effort. That being said the pot at the end of the rainbow just happens to be 'Videotape', a track that picks you up and drops you from the highest point possible and leaves you with a feeling of being punched in the stomach by a heavyweight boxer... yes this is a fantastic thing!

I don't like when my favourite album of the artist is the one that is already universally mentioned and loved (I like it when my fav album is no. 2 in usual person's mind so I can tell them why it is the best), but this is such a great album, and (phew) best by Radiohead.
Reckoner, Jigsaw, Nude and All I Need are the highlights (and they are much higher than most artists' best works), the next would be House Of Cards and Bodysnatchers. I don't know why Weird Fishes is so beloved (it's a good track though, but why people think it's better than All I Need and Nude and sometimes even better than Jigsaw?). Videotape, Faust Arp and 15 Step are three tracks that can be rated as 4/5 each, and it's the lowest rating you can give to any track on this record.

Very consistent - no bad tracks. The weakest tracks are Faust Arp, House of Cards and Videotape, but they certainly don't drag this album down. Weird Fishes/Arpeggi is my pick from this excellent album followed by 15 Step, Bodysnatchers and Reckoner.

It’s soothing, but not beautiful. Rhythmic, but not melodic. I guess it’s a jazz record for the electronic age. Not my cup of tea.

What an absolutely bizarre record! You can tell that Thom Yorke was feeling some different things when this music was put together, as it features some of the most feverish vocals across Radiohead's discography. All in all, definitely worth a listen if you dig Radiohead's work.

The closest anyone has got to album perfection. Even my least favourite track (Faust Arp) is still a strong effort.

Your feedback for In Rainbows