Into The Wild (soundtrack album) by Eddie Vedder 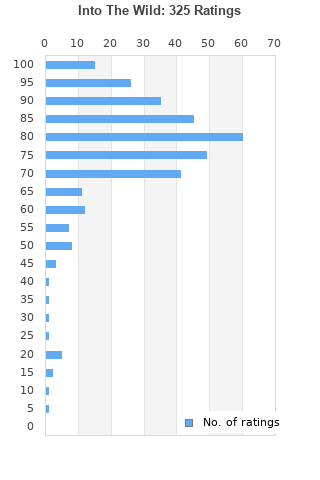 Into The Wild is ranked as the best album by Eddie Vedder. 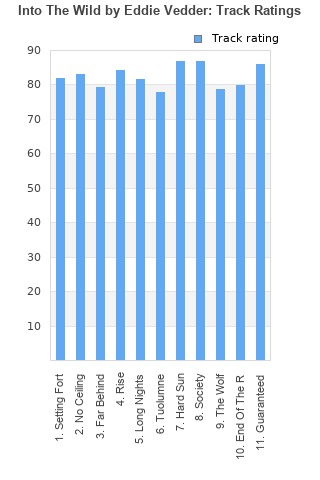 Into The Wild rankings

Into The Wild collection

Into The Wild ratings

Rating metrics: Outliers can be removed when calculating a mean average to dampen the effects of ratings outside the normal distribution. This figure is provided as the trimmed mean. A high standard deviation can be legitimate, but can sometimes indicate 'gaming' is occurring. Consider a simplified example* of an item receiving ratings of 100, 50, & 0. The mean average rating would be 50. However, ratings of 55, 50 & 45 could also result in the same average. The second average might be more trusted because there is more consensus around a particular rating (a lower deviation).
(*In practice, some albums can have several thousand ratings)
This album is rated in the top 2% of all albums on BestEverAlbums.com. This album has a Bayesian average rating of 78.6/100, a mean average of 76.8/100, and a trimmed mean (excluding outliers) of 78.8/100. The standard deviation for this album is 16.5.

Into The Wild favourites

Into The Wild comments

One of my favorites movies and the soundtrack elevates it to an even higher level.

One of the best soundtrack ever

A little gem of an album: at first I also thought: these songs are to short to really develop but the longer ones at the end won me over.

The only thing keeping my score as low as "75" is the brevity of a lot of the tracks. "Setting Forth" and "Far Behind", in particular, deserve full, fleshed out versions.

To me, this album tops any other Pearl Jam's record and I kind of like all of them. Of course, the quality of the movie probably helps it but still...

One of the best soundtrack ever made! Great Job!

Great movie, and great soundtrack.
Incredible much better than the last ten years of Pearl Jam.
Extremely inspired.
Must be on the top 500.

Instant classic. Better, even, than the film itself.

It's pretty good. wasn't there a Sigur Ros song in this movie? am i mistaken?

Your feedback for Into The Wild