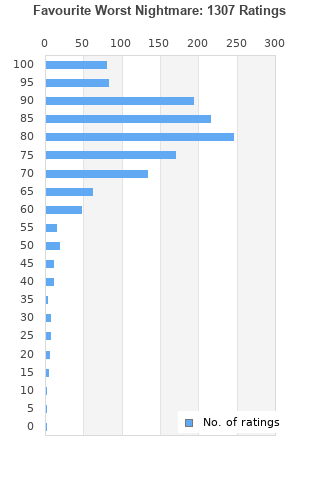 Favourite Worst Nightmare is ranked 3rd best out of 10 albums by Arctic Monkeys on BestEverAlbums.com.

The best album by Arctic Monkeys is Whatever People Say I Am, That's What I'm Not which is ranked number 56 in the list of all-time albums with a total rank score of 21,007. 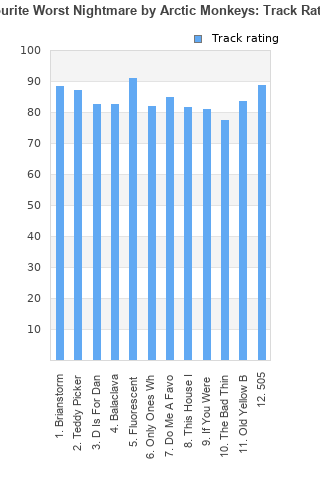 Rating metrics: Outliers can be removed when calculating a mean average to dampen the effects of ratings outside the normal distribution. This figure is provided as the trimmed mean. A high standard deviation can be legitimate, but can sometimes indicate 'gaming' is occurring. Consider a simplified example* of an item receiving ratings of 100, 50, & 0. The mean average rating would be 50. However, ratings of 55, 50 & 45 could also result in the same average. The second average might be more trusted because there is more consensus around a particular rating (a lower deviation).
(*In practice, some albums can have several thousand ratings)
This album is rated in the top 2% of all albums on BestEverAlbums.com. This album has a Bayesian average rating of 79.9/100, a mean average of 78.8/100, and a trimmed mean (excluding outliers) of 80.0/100. The standard deviation for this album is 14.5.

First few tracks start with a hiss and a roar. Overall a decent album but gets a tad 'samey' in the back half

This carries on what they started on their debut album except it is done a little less effectively. It doesn't have that same sharpness and energy that their first release has and it can feel a little tame at time. The style is the same though and so that creates some fantastic songs. A few examples are Brianstorm, Fluorescent Adolescent and 505. The drum work is a highlight for me and makes these select few songs what they are as well as being consistent the whole way through. There is quite a bit of filler on this record unfortunately and other than those 3 songs there isn't much for me to come back for. Overall, this is a weaker version than their debut so it is better to just listen to that record and then pick a few singles off here after.

Carrying on with the good work from their debut album. A bit more filler in this one than their debut (The Bad Thing, This House Is A Circus) but still very solid. My highlights are Fluorescent Adolescent, 505 and Balaclava. More great sarcastic lyrics. "We can't take our eyes off the t-shirt and ties combination. See you later, innovator" - Brianstorm.

Musically predictable. Also, these lyrics are so snidely moralistic! They don't belong in a rock album. They belong in an Oompa Loompa song.

‘FWNM’ is such a leap forward from its predecessor its hard to believe its the same band however I’m not as enamoured with the overall package as its high Overall Rank (239) would indicate. Sure there are some killer tracks here bookending the album in “Brainstorm”, “Teddy Picker” (easily one of my all time favourite AM tracks), “ D is for Dangerous” “Fluorescent Adolescent” and “505” however the album looses pace through the middle 3rd with a bunch of average to poor entries

‘Favourite Worst Nightmare’ is good with an asterisk

A very good successor to their first record. The style had a few departure, but it's still accessible for an Arctic Monkeys record. Even the songs are just as great.

Some bright moments, especially the first two tracks and the closer, but overall a disappointing follow up to their debut album.

One of the most consistently good albums ever. If you took out "The Bad Thing" and "Old Yellow Bricks" this album would actually be perfect. Unfortunaetly those two tracks somewhat bring down the overall quality. But despite that, this record is phenomenal and is incredibly relistenable.

Best Tracks: 505, Fluorescent Adolescent, Do Me A Favour, Brianstorm, Teddy Picker, Only Ones Who Know
Worst Tracks: Old Yellow Bricks, The Bad Thing

9.2/10 A consistently great hard rock album. This is where Matt Helders really shows himself to be one of the greatest drummers ever.

9.2/10 A consistently great hard rock album. This is where Matt Helders really shows himself to be one of the greatest drummers ever.

Your feedback for Favourite Worst Nightmare