Sound Of Silver is ranked as the best album by LCD Soundsystem. 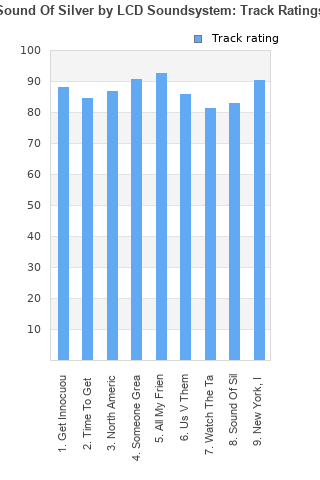 New York, I Love You But You're Bringing Me Down
Rating: 91 (354 votes)Comments:

Rating metrics: Outliers can be removed when calculating a mean average to dampen the effects of ratings outside the normal distribution. This figure is provided as the trimmed mean. A high standard deviation can be legitimate, but can sometimes indicate 'gaming' is occurring. Consider a simplified example* of an item receiving ratings of 100, 50, & 0. The mean average rating would be 50. However, ratings of 55, 50 & 45 could also result in the same average. The second average might be more trusted because there is more consensus around a particular rating (a lower deviation).
(*In practice, some albums can have several thousand ratings)
This album is rated in the top 1% of all albums on BestEverAlbums.com. This album has a Bayesian average rating of 84.1/100, a mean average of 82.6/100, and a trimmed mean (excluding outliers) of 84.1/100. The standard deviation for this album is 15.3.

A pretty good dance album, but not one that strikes my fancy. Basically all the songs but All My Friends and New York are totally uninteresting to me. New York is a good song, but totally out of place in the album.

All My Friends deserves an entire review on its own. It is totally out of place on this album. Out of place not just in style, instrumentation, mood, but also in quality. All My Friends is one of the best songs ever made. It is nostalgic and bittersweet and is exactly what every song should be. Innovative, this song uses some of the most simple yet heartfelt instrumentation of any song. It reminds me a lot of my favorite song of all time, Age Of Consent. Technically, both songs fit into the synthpop and postpunk genres but lean on the postpunk a little more. Both are deeply heartfelt songs tackling loneliness. both feel like they could be the opening song to the greatest film of all time. Both allow one to lie in bed and look up at the ceiling as if it was the night sky and think of better times. Both are longing, but still have the great energy that a song like that should have. They aren't dull and slow. They aren't impersonal and emotionless. They are perfect. All My Friends is perfect. The rest of this album.... not so much

“New York I Love You” is one of the great takedown songs of all time. Savage.

The faster songs are entertaining, occasionally becoming too repetitive in the lyrics.

Just the type of music that fills the world, nothing genuine or original. Now I know what makes the critiques to love this kind of stuff, you must have a bad voice, nil guitar or instrument solos, and no decent melodies. New Wave and punky vibes are really not my jam.

1,000 albums you must hear before you die brought me here, and I was not disappointed.

- North American Scum
- All My Friends
- Us V Them
- New York, I Love You But You're Bringing Me Down

Unanticipated echoes of Talking Heads, but not quite as interesting in any facet.

If you ask yourself "how come I like this album when I'm not really into electronic music", it's because this is barely electronic music. There are three songs that are genuinely electronic genres: "Get Innocuous!" (techno, and a rip-off of "Die Roboter" by Kraftwerk), "Someone Great" (techno, and the only song of the album I genuinely enjoy), and Sound of Silver (house, but only at some parts, which are the only parts I enjoy from the song, the rest contains a poor man's disco beat). The rest are just very sparse punk songs with some unnecessary, and hardly recognizable electronic sounds thrown in, as if they're ashamed to admit they use synths. Very rarely the synth sounds actually add something interesting to the song in a way similar to Brian Eno, like on "Us V Them", but it gets muffled in the background, and even the annoyingly preachy chant of "Us and them, over and over again" gets a more prominent place; the type of chant that only doesn't make me cringe if the message is simple like on Prince's outro on Controversy (the album), and even there I'm glad he kept it short.

So let's talk about the vocals now: it's shit. There is a fine line in new wave where it becomes rather charming how their vocals are so empty of decoration; James Murphy is not on this line. It (everything that isn't just spoken-word or chanting, of which I don't want to explain to anyone why there is no artistic value in) all sounds very try-hard to be something else, every scream sounds calculated, tempered, formulaic, even sometimes going back to old school rock 'n' roll.

And the same goes for the rest of the parts of the music (sometimes bordering on rip-offs as I noted already). Electronic music has simply moved on so much since Kraftwerk; it was adorable when Kraftwerk made very static compositions and funny bleep bloop noises, but in the '00s this doesn't fly anymore. That's not to say Kraftwerk were excused because they were limited in their equipment and lacking of a likeminded community which has tried everything already, I really think they pulled it off in some crazy way. Everytime I put on their music I am afraid my positive view of them will shatter and I will realize they weren't so great after all, but every time I am positively surprised. I digress, but in my defense, talking about Kraftwerk is just so much more interesting than this lame excuse for a band. Everything they do (the rock 'n' roll vocals, the kraftwerk-y or Eno-ish electronics, the punk aesthetic) has been done and better by people decades ago, which makes it rather shameful too really.

So lastly, is it good punk then? It's okay. Again, they follow the rules a bit too much. I think the electronic sounds are the only thing they got going for them to distinguish themselves, and the only excuse for critics to give what is actually just another indie punk album so much praise.

This is what everyone should've been doing in 2007.

Your feedback for Sound Of Silver