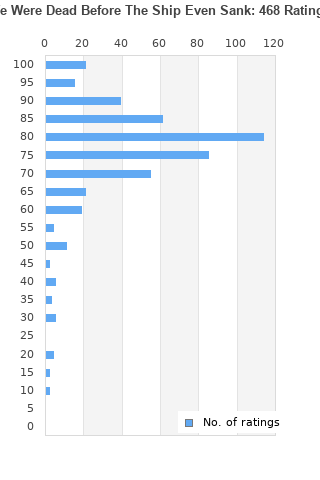 Modest Mouse - We Were Dead Before The Ship Even Sank [CD]
Condition: Brand New
Time left: 1d 12h 40m 59s
Ships to: Worldwide
£6.56
Go to store
Product prices and availability are accurate as of the date indicated and are subject to change. Any price and availability information displayed on the linked website at the time of purchase will apply to the purchase of this product.  See full search results on eBay

We Were Dead Before The Ship Even Sank is ranked 5th best out of 13 albums by Modest Mouse on BestEverAlbums.com.

The best album by Modest Mouse is The Moon & Antarctica which is ranked number 130 in the list of all-time albums with a total rank score of 13,599. 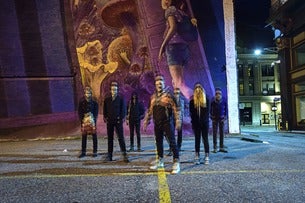 We Were Dead Before The Ship Even Sank track list 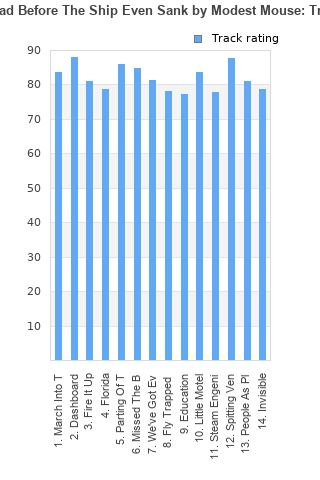 Parting Of The Sensory
Rating: 86 (80 votes)Comments:

We Were Dead Before The Ship Even Sank rankings

We Were Dead Before The Ship Even Sank collection

We Were Dead Before The Ship Even Sank ratings

Rating metrics: Outliers can be removed when calculating a mean average to dampen the effects of ratings outside the normal distribution. This figure is provided as the trimmed mean. A high standard deviation can be legitimate, but can sometimes indicate 'gaming' is occurring. Consider a simplified example* of an item receiving ratings of 100, 50, & 0. The mean average rating would be 50. However, ratings of 55, 50 & 45 could also result in the same average. The second average might be more trusted because there is more consensus around a particular rating (a lower deviation).
(*In practice, some albums can have several thousand ratings)
This album is rated in the top 4% of all albums on BestEverAlbums.com. This album has a Bayesian average rating of 77.5/100, a mean average of 75.9/100, and a trimmed mean (excluding outliers) of 77.6/100. The standard deviation for this album is 15.1.

We Were Dead Before The Ship Even Sank favourites

We Were Dead Before The Ship Even Sank comments

Only "found" them this year and this is my fourth album. I'm loving everything they are delivering and this is no exception. Continuing my new found love for Modest Mouse in 2019, I was blown away with the opening 6 songs. It does dip a bit after that but returns strong towards the end with Spitting Venom and People As Places As People

Sooo underrated. It's a 9/10 and still probably my fourth favorite album of theirs

our ideas held no water, but we used them like a dam.

I think Parting Of The Sensory is my favourite Modest Mouse track and possibly the best track Johnny Marr has been involved with since the Strangeways Here We Come sessions!

Compared to their other albums, this is like a power pop album. Good good

Don't get why everyone hated it, most all songs I could listen to 3 times in a row.

Me too Rucker. I think its still my favorite.

I got into Modest Mouse after Good News, but this was my first anticipated release from them. This was exactly what college-age me wanted.

Easily their most cohesive and professionally executed- but little of it is meomorable at all. Dashboard is a lot of fun though, Fire it Up has an understated poignacy and Spitting Venom is the album's lone out-of-nowhere jolt of adreniline. Still, this album finds them sinking further into the modern-rock-radio ocean rather than swimming against the tide.

It has great songs, but it doesnt all come together into a great album like all their past albums did.
It's unorganized and a bit samey.
I love Isaac's manic vocal delivery on this one though. You can tell he was having alotta fun here.

Your feedback for We Were Dead Before The Ship Even Sank