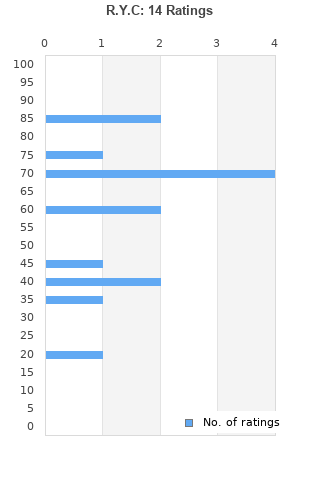 Mura Masa RAW YOUTH COLLAGE Limited Edition RYC New Sealed Red Colored Vinyl LP
Condition: New
Time left: 15d 16h 53m
Ships to: Worldwide
$24.99
Go to store
Product prices and availability are accurate as of the date indicated and are subject to change. Any price and availability information displayed on the linked website at the time of purchase will apply to the purchase of this product.  See full search results on eBay

R.Y.C is ranked 3rd best out of 4 albums by Mura Masa on BestEverAlbums.com.

The best album by Mura Masa is Someday Somewhere which is ranked number 19125 in the list of all-time albums with a total rank score of 48. 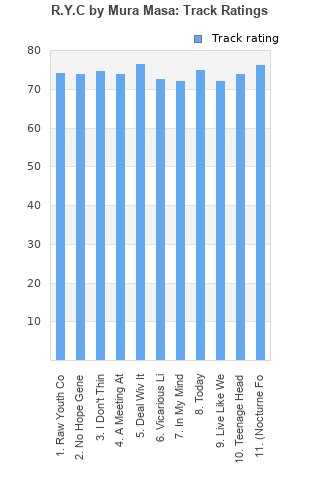 Rating metrics: Outliers can be removed when calculating a mean average to dampen the effects of ratings outside the normal distribution. This figure is provided as the trimmed mean. A high standard deviation can be legitimate, but can sometimes indicate 'gaming' is occurring. Consider a simplified example* of an item receiving ratings of 100, 50, & 0. The mean average rating would be 50. However, ratings of 55, 50 & 45 could also result in the same average. The second average might be more trusted because there is more consensus around a particular rating (a lower deviation).
(*In practice, some albums can have several thousand ratings)
This album has a mean average rating of 58.0/100. The trimmed mean (excluding outliers) is 57.9/100. The standard deviation for this album is 19.7.

Based off of Doorman and Deal Wiv It, a Slowthai/Mura Masa collab album would be dope.

Unfortunately Mura Masa just comes across as a poor man's Mark Ronson on RYC. The production is so smoothed out compared to his best work but even worse are his own vocal contributions. His lyrics are angsty in the worst possible way and it often feels like autotune is thrown in for the hell of it. Most of the features here are serviceable but often their best quality is that they give you a break from Alex's own vocals. The exceptions are Slowthai and Tirzah with the former delivering a proper follow up to his track 'Doorman' from his own album, this time going for a style reminiscent of Mike Skinner's work as the Streets. Tirzah does a good job of not blending into one of several dreary backing instrumentals which at their worst give off Chainsmokers vibes. It's just frustrating when we know he can do better.

Your feedback for R.Y.C