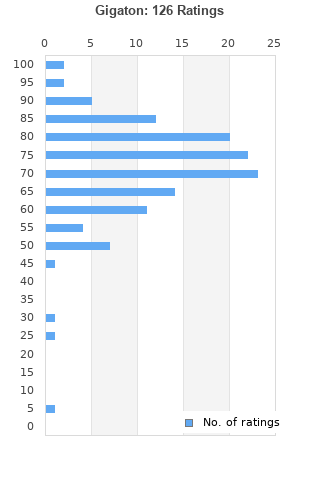 Gigaton is ranked 30th best out of 77 albums by Pearl Jam on BestEverAlbums.com.

The best album by Pearl Jam is Ten which is ranked number 51 in the list of all-time albums with a total rank score of 25,461. 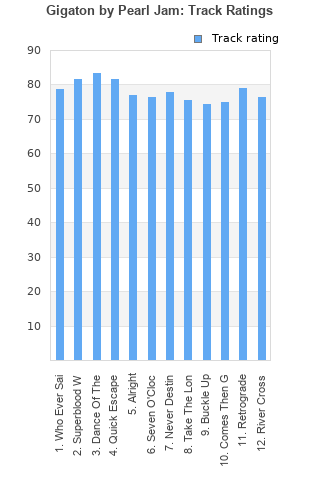 Rating metrics: Outliers can be removed when calculating a mean average to dampen the effects of ratings outside the normal distribution. This figure is provided as the trimmed mean. A high standard deviation can be legitimate, but can sometimes indicate 'gaming' is occurring. Consider a simplified example* of an item receiving ratings of 100, 50, & 0. The mean average rating would be 50. However, ratings of 55, 50 & 45 could also result in the same average. The second average might be more trusted because there is more consensus around a particular rating (a lower deviation).
(*In practice, some albums can have several thousand ratings)
This album is rated in the top 13% of albums on BestEverAlbums.com. This album has a mean average rating of 76.0/100. The trimmed mean (excluding outliers) is 76.2/100. The standard deviation for this album is 8.9.

It's the best they've sounded since Riot Act. Last Pearl Jam album I bought was self titled and I was so underwhelmed by it that I didn't get anything after it until now. Dance Of The Clairvoyants is such a killer first single IMO and people are either loving it or hating it. I love how different it is compared to anything they've done and still manages to rock your face off. The album ends with three beautiful tunes that are more like his solo stuff. Didn't expect it to slow down so much there at the end but it didn't bother me because it was pretty soothing honestly.

It's decent. I wasn't too thrilled with the singles, but they grew on me big time, and I expect the whole album to be the same. An interesting way to reinvent their sound too, their most out there release since Binaural.

Your feedback for Gigaton