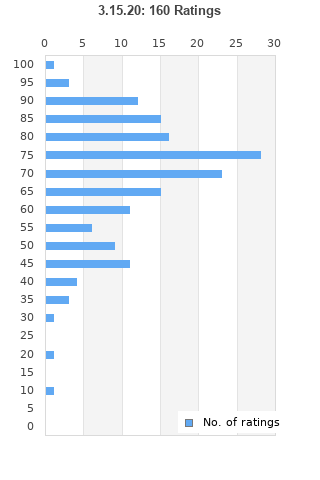 3.15.20 is ranked 6th best out of 11 albums by Childish Gambino on BestEverAlbums.com.

The best album by Childish Gambino is "Awaken, My Love!" which is ranked number 758 in the list of all-time albums with a total rank score of 2,484. 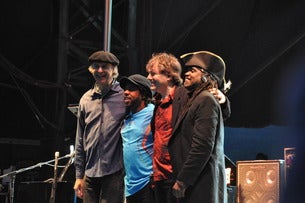 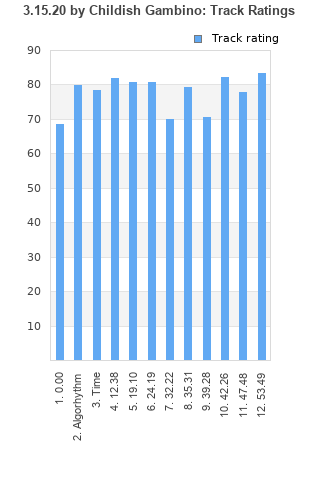 Rating metrics: Outliers can be removed when calculating a mean average to dampen the effects of ratings outside the normal distribution. This figure is provided as the trimmed mean. A high standard deviation can be legitimate, but can sometimes indicate 'gaming' is occurring. Consider a simplified example* of an item receiving ratings of 100, 50, & 0. The mean average rating would be 50. However, ratings of 55, 50 & 45 could also result in the same average. The second average might be more trusted because there is more consensus around a particular rating (a lower deviation).
(*In practice, some albums can have several thousand ratings)
This album has a mean average rating of 73.0/100. The trimmed mean (excluding outliers) is 73.3/100. The standard deviation for this album is 15.9.

I know Fantano went off on the production. But honestly? That's my favorite part. It's very purposeful in its distant, breezy quality, and I can dig it being as effective as it is. That said, so many tracks on this lengthy record feel like half-finished ideas. It's like Glover wants to be Frank Ocean or Daniel Caesar, but instead of introspective and atmospheric, it just feels like stoner R&B--if you can even classify that as a thing. Maybe it's meant to feel open and free--which, sure--but that's pretty much the whole thing, save for some subtle variations here and there.

Not bad, by any means. Incredibly easy on the ears, and not without a few highlights. But it's a little too long and homogenous.

It's unfair that one person has so much talent.

Better than what most critics rated it IMO. Liked Big foot and the last track a lot.

Lot of aphex twin vibes from this, call me crazy. It’s a wonderful array of true creativity and abstract ideas put together in a record. Some sounds are very well put together, and some are a bit loud and repetitive. After only two listens, I may not be able to fully understand some of Glover’s ideas, but I can definitely salute the route he has taken with this body of work.

For now at least a 7/10. I'm really digging the industrial, Gesaffelstein-ish vibe with Gambino's delightful pop harmonics and songwriting. His funk has gotten more dance-pop like Prince than the quasi-communal P-funk of "Awaken, My Love!". The immersive, "Around the World in a Day"-ish 24.19 is also great, but it was starting to get a bit too obvious at that point. But luckily he goes in all sorts of different directions after that.
Do I hear truly new things here? I don't think so, but that's better than a hard "no". I mean the fucking Nobel Prize to anyone who knows what the fuck 35.31 is. But I think that's the thing: he throws a lot of creative ideas at you, but I don't think he fully explores them.
As for insightful commentary: "seven billion people trying to save themselves", "to be happy, really means that someone else ain't"; I rest my case.

I love that he threw "Feels Like Summer" in there and gave it the same type of Aphex Twin-ish non-sensical track name so that you'd be actually surprised.

Only major comeback this year I'm really happily surprised by - well, only one I'm even somewhat surprised by, because the rest started repeating what they did in the early '10s.

I've listened to it three times now and I'm conflicted. I so badly wanna say this is a 10/10 album just because I love Gambino and I've been excited for this project since This is America was released (which isn't even on the record) But it just isn't what I thought it was going to be. I was thinking it'd be full of commentary similarly to This Is America and to a lesser extent his film Guava Island. It wasn't that though, it's not super concise with a theme which is very disappointing, I don't know what to takeaway from the record. There are songs that I enjoy though. Little foot is a bop and algorythm is spectacular.... but even with how much I enjoy these track they feel lacking. I desperately wanted Algorythm to have darker tones or thicker instrumentation, but it wasn't there. Honestly it boils down to me having too high expectations, but I do feel like he could've don better, even though I do enjoy the album. 7/10

Really interesting album. You can hear some Stevie Wonder sounds, Childish Gambino using a deeper voice, trippy stuff, at one point there's a Prince type song and by the end I was like what did I just listen to? Oh yeah Childish Gambino, I'll have to listen to it again because I liked it and it was quite a strange unique trip even for him.