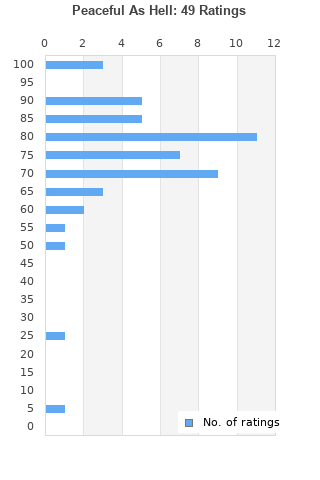 Peaceful As Hell is ranked as the best album by Black Dresses. 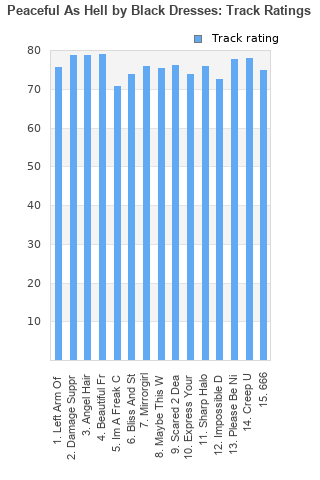 Rating metrics: Outliers can be removed when calculating a mean average to dampen the effects of ratings outside the normal distribution. This figure is provided as the trimmed mean. A high standard deviation can be legitimate, but can sometimes indicate 'gaming' is occurring. Consider a simplified example* of an item receiving ratings of 100, 50, & 0. The mean average rating would be 50. However, ratings of 55, 50 & 45 could also result in the same average. The second average might be more trusted because there is more consensus around a particular rating (a lower deviation).
(*In practice, some albums can have several thousand ratings)
This album is rated in the top 13% of all albums on BestEverAlbums.com. This album has a Bayesian average rating of 75.4/100, a mean average of 74.1/100, and a trimmed mean (excluding outliers) of 75.9/100. The standard deviation for this album is 17.1.

Unbelievably dense sound. So many different styles combined and layered on top of each other but never manages to lose its form. Some songs are better than others but each offers a unique and complete product worthy of listening. I honestly don't know enough about how this was made to comment too much on its intricacies but I really enjoy it. I can hear hints of simple little tunes thoroughly drowned and brought back to life in a beautiful mess of noise.

I never thought I woud actually enjoy this album, but I did! It took a couple of listens, but i really enjoyed this!

Your feedback for Peaceful As Hell