Such Pretty Forks In The Road (studio album) by Alanis Morissette 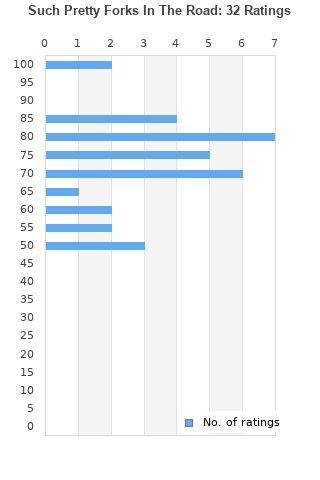 Such Pretty Forks In The Road is ranked 8th best out of 16 albums by Alanis Morissette on BestEverAlbums.com.

The best album by Alanis Morissette is Jagged Little Pill which is ranked number 352 in the list of all-time albums with a total rank score of 5,433.

Listen to Such Pretty Forks In The Road on YouTube 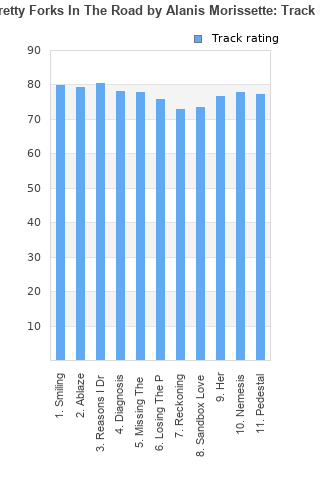 Such Pretty Forks In The Road rankings

Such Pretty Forks In The Road collection

Such Pretty Forks In The Road ratings

Rating metrics: Outliers can be removed when calculating a mean average to dampen the effects of ratings outside the normal distribution. This figure is provided as the trimmed mean. A high standard deviation can be legitimate, but can sometimes indicate 'gaming' is occurring. Consider a simplified example* of an item receiving ratings of 100, 50, & 0. The mean average rating would be 50. However, ratings of 55, 50 & 45 could also result in the same average. The second average might be more trusted because there is more consensus around a particular rating (a lower deviation).
(*In practice, some albums can have several thousand ratings)
This album is rated in the top 24% of all albums on BestEverAlbums.com. This album has a Bayesian average rating of 74.4/100, a mean average of 74.8/100, and a trimmed mean (excluding outliers) of 74.8/100. The standard deviation for this album is 11.8.

Such Pretty Forks In The Road favourites

Such Pretty Forks In The Road comments

It's a decent record. Not at her height (URS) but she is still so unique in her vocal sound it enhances the fairly generic instrumental side.

Alanis Morissette delves into themes of alcoholism, depression and other personal struggles on her latest LP, a collection of mostly safe and melancholic songs with minimal instrumentation. Morissette sounds as great as ever, showing her unique voice and vocal range, but the energy from her earlier material is replaced by a newfound vulnerability. Even the more uptempo tracks, such as 'Reasons I Drink', don't hit quite as hard as Morissette's earliest singles.
The biggest problems is the lack of variation terms of temp and sound. The subject matters touched upon and the lyrics work well; Morissette writes simple but effective lyrics, tapping into modern society (such as referring to a superhero retiring from crime fighting in 'Losing The Plot'). But that's not enough if the surrounding production turns out to be sleepy and sluggish, as is the case here.

Your feedback for Such Pretty Forks In The Road