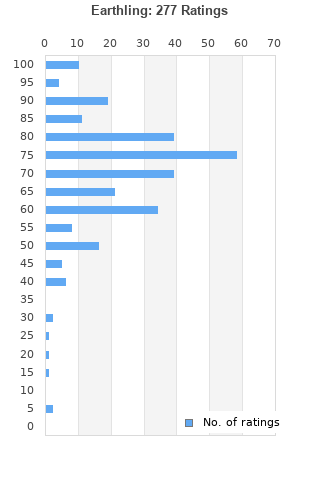 david bowie earthling cassette limited edition
Condition: Like New
Time left: 10h 16m 22s
Ships to: Worldwide
$74.99
Go to store
Product prices and availability are accurate as of the date indicated and are subject to change. Any price and availability information displayed on the linked website at the time of purchase will apply to the purchase of this product.  See full search results on eBay

Earthling is ranked 20th best out of 77 albums by David Bowie on BestEverAlbums.com.

The best album by David Bowie is The Rise And Fall Of Ziggy Stardust And The Spiders From Mars which is ranked number 9 in the list of all-time albums with a total rank score of 63,512. 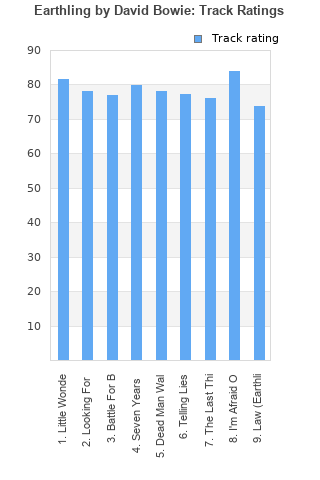 Rating metrics: Outliers can be removed when calculating a mean average to dampen the effects of ratings outside the normal distribution. This figure is provided as the trimmed mean. A high standard deviation can be legitimate, but can sometimes indicate 'gaming' is occurring. Consider a simplified example* of an item receiving ratings of 100, 50, & 0. The mean average rating would be 50. However, ratings of 55, 50 & 45 could also result in the same average. The second average might be more trusted because there is more consensus around a particular rating (a lower deviation).
(*In practice, some albums can have several thousand ratings)
This album has a Bayesian average rating of 71.1/100, a mean average of 70.2/100, and a trimmed mean (excluding outliers) of 71.0/100. The standard deviation for this album is 16.1.

This to me is proof of the man's genius. Its by no means a great album, but for a 50 year old man to not only record a drum'n'bass album, but actually do a decent job shows how remarkable he was.

This is actualy a kinda interesting album, it should definitely be I little higher in his discog

One of Bowie's less notable albums, Earthling is one of Bowie's mid-range works. The only track that really stands out is Seven Years in Tibet, but I can't say there's a bad song on here.

David Bowie on this album is no longer the innovator, he's now trying to fit in with the sounds of the time. It just sounds forced to me, only on, I'm afraid of Americans, does he sound like he's not trying to convince us and maybe himself. Bowie needs to relax, he's trying way too hard here. A very disappointing album.

If this record would have been released by anyone else but David Bowie it would get more respect. I admit it is a little long and some of the tracks could have been eliminated. You can't help but compare it to his classic albums but hey it's better than anything the Stones have released in the last twenty years.

It gets tiresome after a while, an experiment which did not work out quite as it should have. However, there are still some good tracks on it - I like Little Wonder and The Last Thing You Should Do in particular.

This album has never been very popular but I actually quite like it.I think the album should have been about 8-10 mins shorter though as some of the tracks are a bit long and outstay their welcome.Seven Years in Tibet is my personal favorite on album.

Your feedback for Earthling