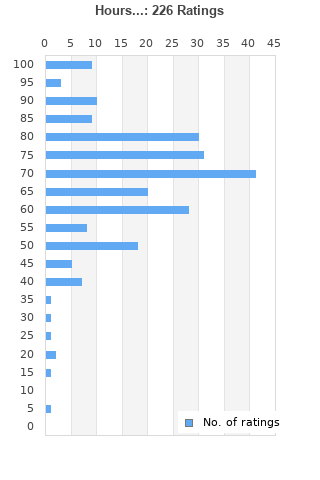 Hours... is ranked 21st best out of 88 albums by David Bowie on BestEverAlbums.com.

The best album by David Bowie is The Rise And Fall Of Ziggy Stardust And The Spiders From Mars which is ranked number 9 in the list of all-time albums with a total rank score of 57,341. 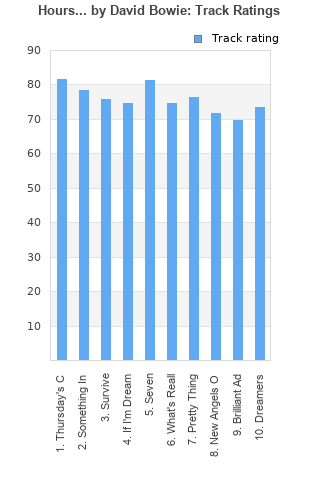 Rating metrics: Outliers can be removed when calculating a mean average to dampen the effects of ratings outside the normal distribution. This figure is provided as the trimmed mean. A high standard deviation can be legitimate, but can sometimes indicate 'gaming' is occurring. Consider a simplified example* of an item receiving ratings of 100, 50, & 0. The mean average rating would be 50. However, ratings of 55, 50 & 45 could also result in the same average. The second average might be more trusted because there is more consensus around a particular rating (a lower deviation).
(*In practice, some albums can have several thousand ratings)
This album has a Bayesian average rating of 69.6/100, a mean average of 68.5/100, and a trimmed mean (excluding outliers) of 69.5/100. The standard deviation for this album is 16.1.

One of Bowie’s least memorable albums it has some moments but not many.

As I've heard said, you imagine someone stating that major artists' albums get weaker as they age, and Bowie retorting, 'Hold my beer...' A great collection of songs, and the beginning of a wonderful run of late albums.

underated bowie album. easy on the ear than outside/earthling

Certainly one of the best later albums by Bowie, Hours has the same consistent quality of Earthling but also has the standout tracks that Earthling was sorely lacking, namely The Pretty Things are Going to Hell and Seven. Never could understand why some people rank this as the worst Bowie album, its up there with Heathen for me.

Extremely disappointing. I suppose it's meant to be chill out music but it's all just dull and boring. It's all so safe and conservative, not what you want from Bowie at all. A real let down as far as i'm concerned.

A solid record by Mr. Bowie. He may have lost his edge but he can not be dismissed.

A good album from Bowie not classic but has it's moments especially with 'Seven' and 'The Pretty Things Are Going To Hell'. I would say it is slightly better than Reality not quite as good as Heathen.

I have only just got around to listening to this. I thought The Next Day album was excellent but this is even better. Along with Reality and Heathen Bowie has never really been away.
Something in the air

Your feedback for Hours...