Slave Ambient (studio album) by The War On Drugs 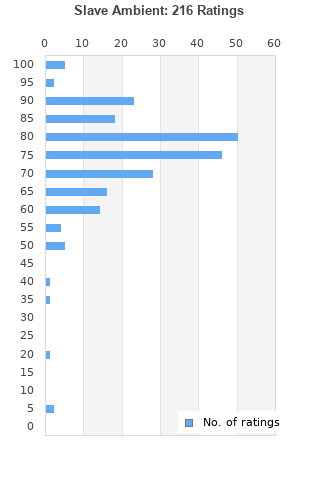 Slave Ambient is ranked 4th best out of 7 albums by The War On Drugs on BestEverAlbums.com.

The best album by The War On Drugs is Lost In The Dream which is ranked number 161 in the list of all-time albums with a total rank score of 10,681. 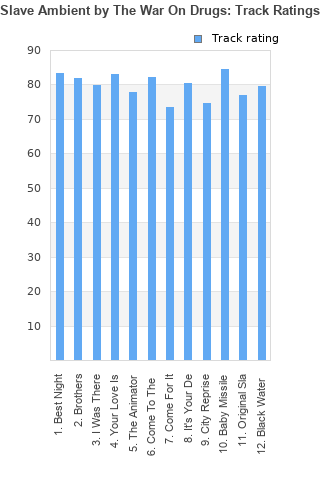 Rating metrics: Outliers can be removed when calculating a mean average to dampen the effects of ratings outside the normal distribution. This figure is provided as the trimmed mean. A high standard deviation can be legitimate, but can sometimes indicate 'gaming' is occurring. Consider a simplified example* of an item receiving ratings of 100, 50, & 0. The mean average rating would be 50. However, ratings of 55, 50 & 45 could also result in the same average. The second average might be more trusted because there is more consensus around a particular rating (a lower deviation).
(*In practice, some albums can have several thousand ratings)
This album is rated in the top 7% of all albums on BestEverAlbums.com. This album has a Bayesian average rating of 76.1/100, a mean average of 75.0/100, and a trimmed mean (excluding outliers) of 76.2/100. The standard deviation for this album is 13.3.

A publication once called this Boss-Gaze music. There are some psychedelic influences on this album but its predominantly really good Springsteen sounding heartland rock.

Good album for sure. Some of the songs are really similar, however, and kind of blend in. Best Night and Black Water Falls would be my two favorite tracks. Not quite as good as Lost In The Dream, but definitely worth a listen

An uneven record for sure, but a lot of these songs are the best by TWOD. Its clear that this is a band that was still maturing and perfecting its sound, which happened on the subsequent release in 2014. While its not as good as Lost in the Dream or A Deeper Understanding, there is some great tunes on here. Its also the first we hear of what is now TWOD trademark sound, a heartland/indie rock fusion. Some of the tracks will definitely have you reaching for the skip button, but overall its a good effort. Also its home to maybe my favorite TWOD track, "Brothers".

Great to see how they developed from a band among others and forgotten to really great.

Hard work can take you there, as well as new faces in life. Maturity or something like that. You can find the magic later. Often it's just a youth brilliance debut from a band, and then not so much.

I actually prefer this to Lost in the Dream. This feels a lot tighter.

I love the starting sound of this album. Helps me sleep.

Lacks the pop melodies I typically fall for but completely makes up for it with brilliant lyricism and superb production. Clearly this record was made with a great deal of passion.

In parts evoking indie staples like arcade fire and broken social scene, and past favorites like the verve, they show a mastery of the subject material. The pop angle doesn't shine through though, so while these songs feel rockin', the melodies don't often come knockin'.

Your feedback for Slave Ambient