Live Drugs (live album) by The War On Drugs 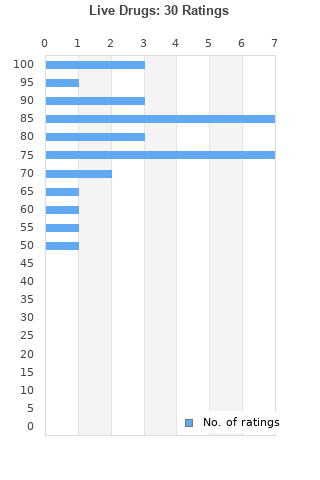 Live Drugs is ranked 5th best out of 7 albums by The War On Drugs on BestEverAlbums.com.

The best album by The War On Drugs is Lost In The Dream which is ranked number 161 in the list of all-time albums with a total rank score of 10,801. 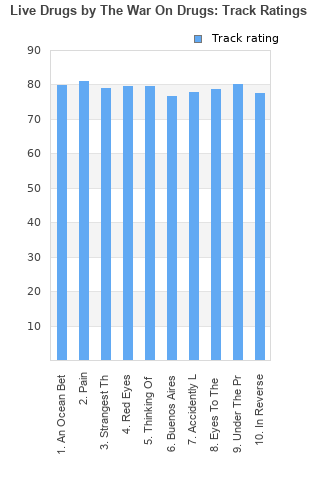 Rating metrics: Outliers can be removed when calculating a mean average to dampen the effects of ratings outside the normal distribution. This figure is provided as the trimmed mean. A high standard deviation can be legitimate, but can sometimes indicate 'gaming' is occurring. Consider a simplified example* of an item receiving ratings of 100, 50, & 0. The mean average rating would be 50. However, ratings of 55, 50 & 45 could also result in the same average. The second average might be more trusted because there is more consensus around a particular rating (a lower deviation).
(*In practice, some albums can have several thousand ratings)
This album is rated in the top 2% of all albums on BestEverAlbums.com. This album has a Bayesian average rating of 79.6/100, a mean average of 82.3/100, and a trimmed mean (excluding outliers) of 82.3/100. The standard deviation for this album is 10.2.

A solid live album. Mostly made up of tracks from Lost in the Dream and A Deeper Understanding. What makes this such a unique listen is the excellent production. This album is made up of live recordings from 2014-2019 that are beautifully synced together listeners could be easily mistake it as a recording from a single show.

2020 lock down and cessation of touring saw a slew of excellent live album releases and this one is excellent capturing the best moments primarily from ‘A Deeper Understanding’ and ‘Lost In The Dream’. The War On Drugs recording catalogue is but small so any release from Adam and co should be cherished

Your feedback for Live Drugs