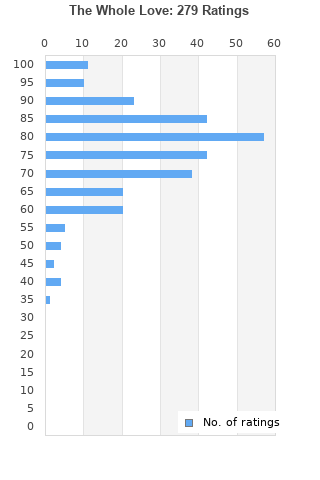 Wilco - The Whole Love New Sealed CD
Condition: Brand New
Time left: 1d 9h 11m 46s
Ships to: Worldwide
$9.95
Go to store
Product prices and availability are accurate as of the date indicated and are subject to change. Any price and availability information displayed on the linked website at the time of purchase will apply to the purchase of this product.  See full search results on eBay

The Whole Love is ranked 6th best out of 16 albums by Wilco on BestEverAlbums.com.

The best album by Wilco is Yankee Hotel Foxtrot which is ranked number 46 in the list of all-time albums with a total rank score of 27,482. 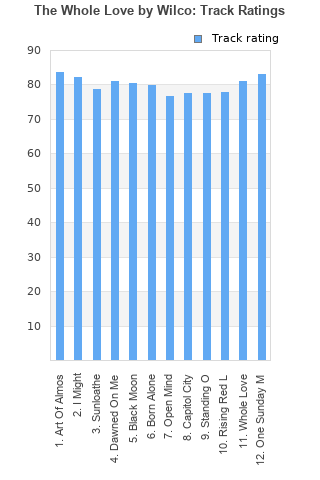 Rating metrics: Outliers can be removed when calculating a mean average to dampen the effects of ratings outside the normal distribution. This figure is provided as the trimmed mean. A high standard deviation can be legitimate, but can sometimes indicate 'gaming' is occurring. Consider a simplified example* of an item receiving ratings of 100, 50, & 0. The mean average rating would be 50. However, ratings of 55, 50 & 45 could also result in the same average. The second average might be more trusted because there is more consensus around a particular rating (a lower deviation).
(*In practice, some albums can have several thousand ratings)
This album is rated in the top 4% of all albums on BestEverAlbums.com. This album has a Bayesian average rating of 77.3/100, a mean average of 76.9/100, and a trimmed mean (excluding outliers) of 77.5/100. The standard deviation for this album is 11.9.

My first impression of this album was that most of the tracks on it were a litle boring--an experience I have with a lot of Wilco's albums, as they all tend to be slow growers. The exception this time was the album's closing track, the twelve-minute, subtle stunner "One Sunday Morning," a song that Jeff Tweedy wrote for his son. Upon further listens, of course, I discovered that a number of the other songs are great, too, especially "Dawned on Me," a mid-tempo rocker that shows Tweedy as a songwriter reaching a level of emotional maturity and self-awareness that can only come with age and experience.

I started listening to Wilco very late (in 2011), so that is maybe the reason why this album is my favourit. But for me this has the perfect mixture of popsongs and experimental songs. I put this pretty high in my greatest album charts, but more to honor the band

I had kind of given up on Wilco thinking they had slipped into an Adult Contemporary coma, but this is a wonderful return to form. Loose and carefree, Jeff Tweedy & co have a skip in their step for this one.

This album is great. The songwriting is excellent, the guitar work is really cool, the arrangements are great, it’s just a great album. There are a couple moments where it isn’t incredible, but it’s still good. It is certainly not a disappointing album and it’s one worth getting.

Anyone else catching the "Beatles"ness of this band in their later years? It is lacking of course the Beatles flair. Wilco is solid and interesting at times, but they hit this ceiling for me from becoming great.

Art of Almost is one of the best songs Wilco has ever done, the rest of the album is pretty good too. Wilco is still alive, fortunately.

Like a box of choclates, this one is a product of its little pieces, carefully chosen to get the best possible experience from the listener. Really, the one thing you can not fault thi band over is the care they put into the finer details of their work. 'Black Moon' and 'Capitol City' rise a little above the rest but mostly even water. Simple listening for the light guitar fan.

Nice bounce back from Wilco (The Album). The Whole Love is still growing on me. One day, the listening world will realize that Wilco kept going after Yankee Hotel Foxtrot and continued to write great music.

In my opinion, Wilco lost its experimenting creative edge and slid a bit towards adult contemporary fare on albums "sky blue sky" and "wilco (the album)". There were a couple songs like "bull black nova" and "impossible germany" that stretched the new, adult wilco sound, but for the most part, they sounded more like a band fine in where it was at, ready to put out solid rock shows and nothing more. i long for "summerteeth", "yankee hotel foxtrot" and "a ghost is born" (despite its overreaching guitar feedback).

Enter "the whole love" which pushes at their current boundaries a little more, and is all the better for it, nicely summed up on opening track "art of almost". Nels Cline brings the shredder too, which augments a bunch of the songs, like on "standing o".

Your feedback for The Whole Love