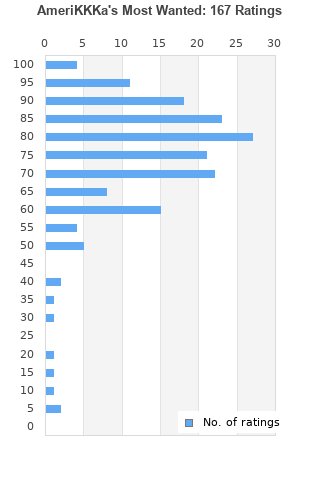 (IP58) Ice Cube, Amerikkka's Most Wanted - 2015 CD
Condition: Like New
Time left: 1d 21h 53m 5s
Ships to: Worldwide
£4.99
Go to store
Product prices and availability are accurate as of the date indicated and are subject to change. Any price and availability information displayed on the linked website at the time of purchase will apply to the purchase of this product.  See full search results on eBay

AmeriKKKa's Most Wanted is ranked 2nd best out of 15 albums by Ice Cube on BestEverAlbums.com.

The best album by Ice Cube is Death Certificate which is ranked number 2878 in the list of all-time albums with a total rank score of 522. 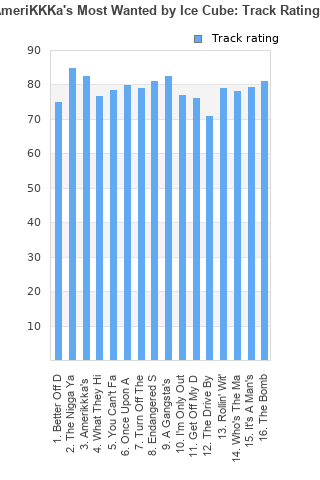 Rating metrics: Outliers can be removed when calculating a mean average to dampen the effects of ratings outside the normal distribution. This figure is provided as the trimmed mean. A high standard deviation can be legitimate, but can sometimes indicate 'gaming' is occurring. Consider a simplified example* of an item receiving ratings of 100, 50, & 0. The mean average rating would be 50. However, ratings of 55, 50 & 45 could also result in the same average. The second average might be more trusted because there is more consensus around a particular rating (a lower deviation).
(*In practice, some albums can have several thousand ratings)
This album is rated in the top 6% of all albums on BestEverAlbums.com. This album has a Bayesian average rating of 76.8/100, a mean average of 75.2/100, and a trimmed mean (excluding outliers) of 77.1/100. The standard deviation for this album is 17.8.

Raging lyrics. Skillful delivery. Solid production. This is so good, you can get past the misogyny.

Recognizing its cultural and critical significance, as well as its utter obsolescence

Second track's a banger tho

Ice Cube always has great delivery and sometimes has something meaningful to say, when he's not being a misogynist.

One of the best NWA solo albums. Cube's brutality on this album can justify how was probably the group's best MC. He was willing to be the villain which is quite fascinating. Interesting to note The Bomb Squad produced this album.

As good, maybe even better record than, straight outta Compton. This is a classic hip hop album and still the best ice cube LP in my opinion. Still amazes to this day. Cracking stuff.

This, Death Cert and the Chronic are the best NWA solo albums.

I've always thought Ice Cube was the best member of NWA. This is proof of that.

A wonderful marriage of east and west coast hip-hop. As socio-political as it is gangsta. Ice Cube doesn't disappoint.

Your feedback for AmeriKKKa's Most Wanted