The Hunter (studio album) by Mastodon 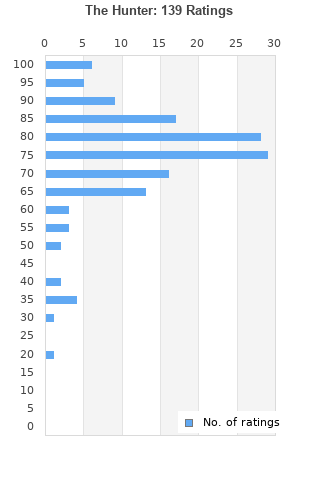 The Hunter is ranked 6th best out of 12 albums by Mastodon on BestEverAlbums.com.

The best album by Mastodon is Crack The Skye which is ranked number 978 in the list of all-time albums with a total rank score of 1,891. 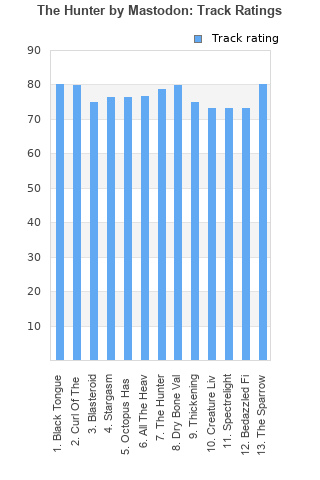 Rating metrics: Outliers can be removed when calculating a mean average to dampen the effects of ratings outside the normal distribution. This figure is provided as the trimmed mean. A high standard deviation can be legitimate, but can sometimes indicate 'gaming' is occurring. Consider a simplified example* of an item receiving ratings of 100, 50, & 0. The mean average rating would be 50. However, ratings of 55, 50 & 45 could also result in the same average. The second average might be more trusted because there is more consensus around a particular rating (a lower deviation).
(*In practice, some albums can have several thousand ratings)
This album is rated in the top 10% of all albums on BestEverAlbums.com. This album has a Bayesian average rating of 75.4/100, a mean average of 74.8/100, and a trimmed mean (excluding outliers) of 75.6/100. The standard deviation for this album is 14.6.

Black Tongue has what is possibly the best riff I’ve ever heard. It kicks some major ass, and the rest of the album is pretty consistently good too.

I definitely prefer the sludgier side of Mastodon to their melodic side, but this album has a nice mix of both. Easily their most mainstream release, which in itself makes it kind of unique in their catalog. Curl the Burl easily stands out as my favourite song.

So I don't dislike this, but let me but it this way: if this was the first Mastodon album I had heard, I wouldn't have bothered to listen to the others. It's undeniably catchy, heavy, and fun, but it's also very formulaic and middle of the road. Crack The Skye is an absolute beast of an album that's just oozing with creativity, but this is a pretty generic metal record filled with riffs and choruses. I don't hate riffs and choruses, but you have to agree they get boring when every song has them.

My least favorite album of theirs which is only to say just how much this band kicks butt. It may not be phenomenal but this is still really good and worth a listen.

Mastodon have pulled back from the conceptual prog approach of their last couple of albums. The Hunter is a more straightforward hard rock record, sounding at times like '70s arena fuzz rock. The tracks are tight, punchy, and extremely hummable.

Mastodon has done it again. Another great album from a band that continues to evolve its sound beyond metal. Troy reaches a new level with his singing on this album, while Brent and Bill continue to create awesome licks. It may not be as aggressive and exciting as Leviathan, but it mixes a variety of styles that work.

Very average album. Most of the songs starts very promisingly but then just waiting to be finished because maybe the next will be better.

Still waiting for Mastodon to release a less than stellar album.

Your feedback for The Hunter