Shake Your Money Maker (studio album) by The Black Crowes 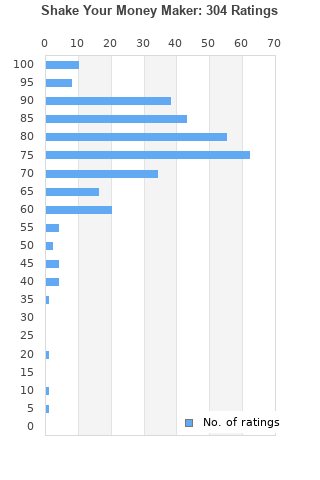 Shake Your Money Maker is ranked 2nd best out of 23 albums by The Black Crowes on BestEverAlbums.com.

The best album by The Black Crowes is The Southern Harmony And Musical Companion which is ranked number 1253 in the list of all-time albums with a total rank score of 1,415. 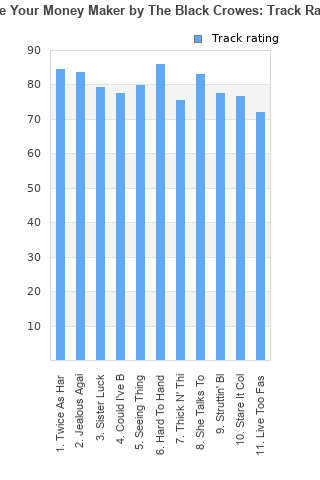 Rating metrics: Outliers can be removed when calculating a mean average to dampen the effects of ratings outside the normal distribution. This figure is provided as the trimmed mean. A high standard deviation can be legitimate, but can sometimes indicate 'gaming' is occurring. Consider a simplified example* of an item receiving ratings of 100, 50, & 0. The mean average rating would be 50. However, ratings of 55, 50 & 45 could also result in the same average. The second average might be more trusted because there is more consensus around a particular rating (a lower deviation).
(*In practice, some albums can have several thousand ratings)
This album is rated in the top 6% of all albums on BestEverAlbums.com. This album has a Bayesian average rating of 76.5/100, a mean average of 75.9/100, and a trimmed mean (excluding outliers) of 76.6/100. The standard deviation for this album is 13.7.

Holds up and sounds fresh even today. Heavy Stones and Faces influence with just a little bit of Skynyrd and Guns and Roses. It's good beyond the singles.

One of the best albums of 1990. One of the best southern rock albums ever. After much of the music released in the New Wave 80s, this was a breath of fresh air. We were exposed to real rock music again!

This is such an amazing debut record!

Your feedback for Shake Your Money Maker