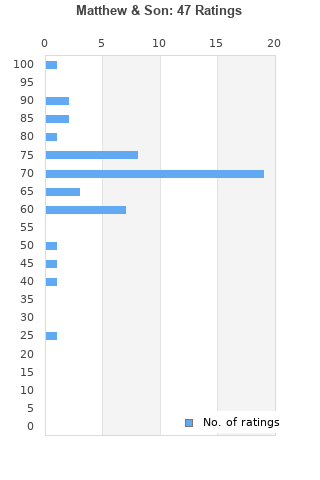 Matthew & Son is ranked 7th best out of 19 albums by Cat Stevens on BestEverAlbums.com.

The best album by Cat Stevens is Tea For The Tillerman which is ranked number 483 in the list of all-time albums with a total rank score of 3,858. 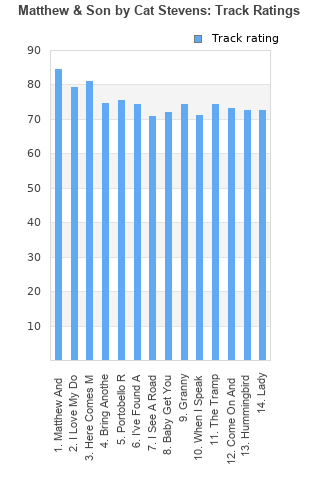 Rating metrics: Outliers can be removed when calculating a mean average to dampen the effects of ratings outside the normal distribution. This figure is provided as the trimmed mean. A high standard deviation can be legitimate, but can sometimes indicate 'gaming' is occurring. Consider a simplified example* of an item receiving ratings of 100, 50, & 0. The mean average rating would be 50. However, ratings of 55, 50 & 45 could also result in the same average. The second average might be more trusted because there is more consensus around a particular rating (a lower deviation).
(*In practice, some albums can have several thousand ratings)
This album has a Bayesian average rating of 70.9/100, a mean average of 69.3/100, and a trimmed mean (excluding outliers) of 70.3/100. The standard deviation for this album is 12.6.

The singles off this albums are some of the best sounding recordings that you can find from the period. They're very well written and benefit from the wide array of sessions musicians employed, especially John Paul Jones. Stevens' voice lends itself much better to softer songs like "Portobello Road" than more challenging ones like "I See A Road". Overall: really good songwriting but a vocalist that is a bit misplaced.

Your feedback for Matthew & Son