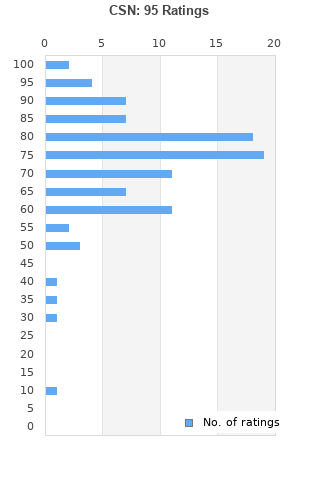 CSN is ranked 2nd best out of 19 albums by Crosby, Stills & Nash on BestEverAlbums.com. 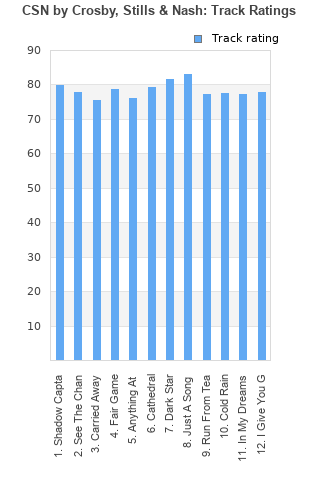 Rating metrics: Outliers can be removed when calculating a mean average to dampen the effects of ratings outside the normal distribution. This figure is provided as the trimmed mean. A high standard deviation can be legitimate, but can sometimes indicate 'gaming' is occurring. Consider a simplified example* of an item receiving ratings of 100, 50, & 0. The mean average rating would be 50. However, ratings of 55, 50 & 45 could also result in the same average. The second average might be more trusted because there is more consensus around a particular rating (a lower deviation).
(*In practice, some albums can have several thousand ratings)
This album has a Bayesian average rating of 73.8/100, a mean average of 73.2/100, and a trimmed mean (excluding outliers) of 73.8/100. The standard deviation for this album is 14.8.

I do not any problems with this album, an underrated accomplishment. It must be the late 1970's music revolution that made this kind of music obsolete, to me, this is not obsolete, very usable even in the 2020s.

Its not on the level of their first two albums, but CSN is an enjoyable and cohesive effort. Although none of the songs reach the high points the self titled debut and Deja Vu hit. Graham Nash's contributions to this album are among the best songs. Its his works that stand out from the pack.

This record was highly anticipated and such a disappointment. Most of the songs are forgettable, musically it's like they weren't even in the same room.

It's not bad, but it's clear the magic is gone.

Decent album. While not as great as their earlier works ot still turned out to be a very diverse and interesting set. Graham Nash's songs are the ones that make the album. I got the chills the first time I heard "Cathedral".

Your feedback for CSN