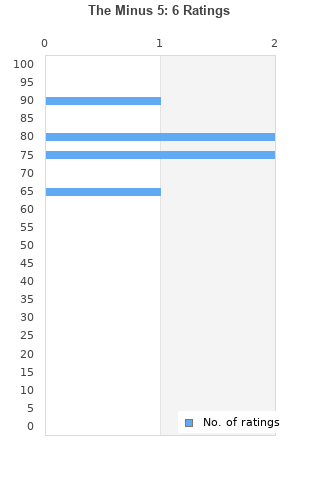 THE MINUS 5 Dear December BLACK FRIDAY RSD 2017 NEW SEALED
Condition: New
Time left: 1h 38m 33s
Ships to: Worldwide
$29.99
Go to store
Product prices and availability are accurate as of the date indicated and are subject to change. Any price and availability information displayed on the linked website at the time of purchase will apply to the purchase of this product.  See full search results on eBay

The Minus 5 is ranked 2nd best out of 10 albums by The Minus 5 on BestEverAlbums.com.

The best album by The Minus 5 is Down With Wilco which is ranked number 18744 in the list of all-time albums with a total rank score of 52. 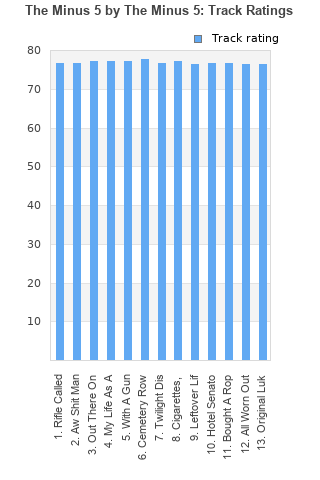 They start off classy with "rifle called goodbye" before laying into the banger "aw shit man", their most balls-out rocker yet. "out there on the maroon" is witty fun starting "i had 6 white russians tonight / and 2 of them were people / it's not pretty when your best friend is a saloon / and you're always out there on the maroon". haha. "my life is a creep" is a piano jaunt with a more serious take on the same wit where there's "no film crew for my life as a creep" (and the guy's "not supremely evil"). "with a gun" is an upbeat, acoustic piece where "i'll kick your sister's ass / i'm gonna take your brother's face and smash it in the grass / it's no wonder i'm spiral-bound / i just want to be around". A big part of the selling point of their previous album "down with wilco" and this album is the subtle lyrical humor, delivered atop a bed of indie-laden acoustic jams. It's like hanging out with some funny musician friends after hitting the bars for a couple hours that are serious about their careers but have the humor and self-deprecation to have a little fun at their own (and the people around them) expense while jamming during some after-bar drinks at their apartment. It's kinda like if the barenaked ladies focused a little more on their musicianship and perfecting song structure and did less cornball ham-ups. "cemetery row" breaks through the entire album for a number of reasons. The song sounds simple and elegant. The lead vocals are handled by Colin Meloy (of the decemberists) seemingly singing in the lyrical context of a decemberist tune but without the houghty air. He delivers the song in earnest and the song has that much more power (ala beauty in darkness) because of it. This would be a standout track on a decemberists song, even with its simple song structure and slide guitar. i like how the backing vocals are handled. "cemetary row isn't such a bad place / don't you wanna go?" Wonderful choice in Colin to sing this song and he contains himself for a beautifully, understated performance (for him). (If his vocal affectations put you off, he holds those back too.) In "twilight distillery", the additional harmonies ("we're gonna be there soon") help punctuate the sing-along nature of this otherwise plain indie-rocker. "cigs, coffee, booze" is all you need in one song where "your mama knew it and now i know it too" (more slide guitar). Some more subtle humor: "i never want to let you go / and that's why i bought a rope" (song = "bought a rope"). haha.

Your feedback for The Minus 5