It's Only Rock 'N' Roll (studio album) by The Rolling Stones 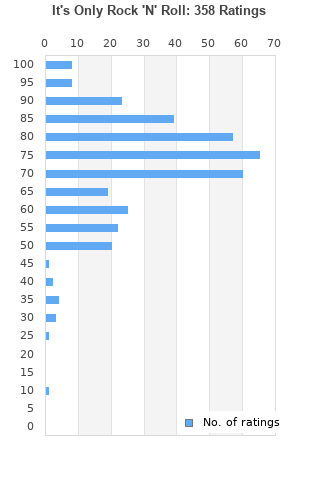 Rolling Stones - It's Only Rock 'n' Roll - LP Vinyl - New
Condition: New
Time left: 10h 7m 34s
Ships to: Worldwide
£20.62
Go to store
Product prices and availability are accurate as of the date indicated and are subject to change. Any price and availability information displayed on the linked website at the time of purchase will apply to the purchase of this product.  See full search results on eBay

It's Only Rock 'N' Roll is ranked 12th best out of 87 albums by The Rolling Stones on BestEverAlbums.com.

The best album by The Rolling Stones is Exile On Main St. which is ranked number 42 in the list of all-time albums with a total rank score of 29,978.

Listen to It's Only Rock 'N' Roll on YouTube 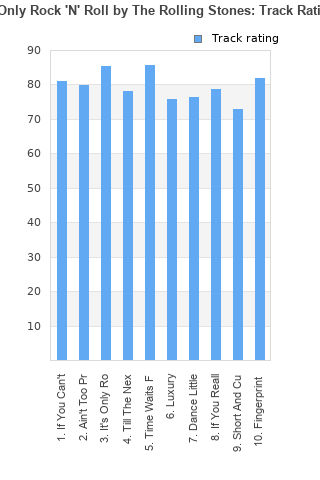 It's Only Rock 'N' Roll rankings

It's Only Rock 'N' Roll collection

It's Only Rock 'N' Roll ratings

Rating metrics: Outliers can be removed when calculating a mean average to dampen the effects of ratings outside the normal distribution. This figure is provided as the trimmed mean. A high standard deviation can be legitimate, but can sometimes indicate 'gaming' is occurring. Consider a simplified example* of an item receiving ratings of 100, 50, & 0. The mean average rating would be 50. However, ratings of 55, 50 & 45 could also result in the same average. The second average might be more trusted because there is more consensus around a particular rating (a lower deviation).
(*In practice, some albums can have several thousand ratings)
This album has a Bayesian average rating of 72.7/100, a mean average of 71.9/100, and a trimmed mean (excluding outliers) of 72.7/100. The standard deviation for this album is 13.8.

It's Only Rock 'N' Roll favourites

It's Only Rock 'N' Roll comments

Too much normal record

Some great songs It's Only Rock N Roll, Time waits for noone, Til the Next goodbye.

The rest are somewhere in between. Fingerprint file is interesting, it just doesnt really fit with the rest of the album.

Okay, so it's not Sticky or Beggars, but this album is grossly underrated. I don't find a need to skip any of the 10 tracks and most are excellent examples of Stones rock and roll. The underrated epic deep cut on this one is Time Waits for No One, a genuine masterpiece.

The follow up to the slightly disappointing goat's head soup. It's a much more urgent album, especially on the opener, if you can't rock me, followed by the temptations cover ain't too proud too beg, and off course the anthemic title track. After that, the best of the tracks are the ballads, 'till the next goodbye and if you really want to be my friend. There's some nice guitar work from Mick Taylor on time waits for no one and there's a nice funky ending with fingerprint file. It's a good album but it's nothing special and a lot of the songs feel overlong. It's a typical 70's stones album, but it's certainly not essential to the casual fan.

Not as great as the massively overlooked "Goats Head Soup" but still one of the best stones offerings after their 'classic run of four.

One very good song, one good, and a whole pile of average on either side of those. Thanks for "Time Waits..." anyway.

Like the previous comments say, it's a strong front half but pretty weak on the second side.

An underrated album the first 5 tracks plus the final track are brilliant.Skip Dance Little Sister and Short & Curlies and you have a really good stones Album.

The first five songs are pretty solid, but the rest of the album kind of falls flat.
Best songs: "If You Can't Rock Me", "It's Only Rock'n Roll", and "Time Waits For No One"

Your feedback for It's Only Rock 'N' Roll