Headless Heroes Of The Apocalypse (studio album) by Eugene McDaniels 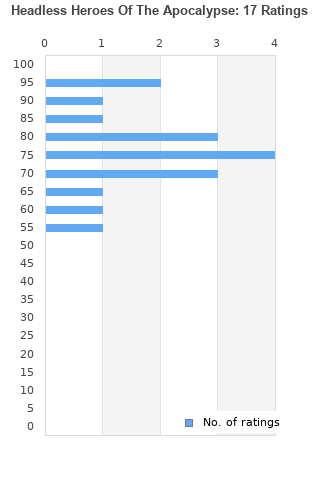 Eugene McDaniels - Headless Heroes Of The Apocalypse [New Vinyl LP] Ho
Condition: New
Time left: 4d 23h 12m 58s
Ships to: Worldwide
$25.57
Go to store
Product prices and availability are accurate as of the date indicated and are subject to change. Any price and availability information displayed on the linked website at the time of purchase will apply to the purchase of this product.  See full search results on eBay

Headless Heroes Of The Apocalypse is ranked 2nd best out of 2 albums by Eugene McDaniels on BestEverAlbums.com.

The best album by Eugene McDaniels is Outlaw which is ranked number 11486 in the list of all-time albums with a total rank score of 96.

Listen to Headless Heroes Of The Apocalypse on YouTube 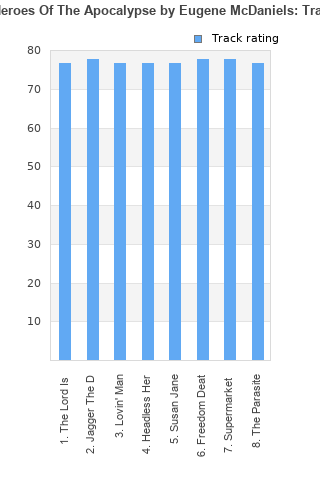 Headless Heroes Of The Apocalypse rankings

Headless Heroes Of The Apocalypse collection

Headless Heroes Of The Apocalypse ratings

Rating metrics: Outliers can be removed when calculating a mean average to dampen the effects of ratings outside the normal distribution. This figure is provided as the trimmed mean. A high standard deviation can be legitimate, but can sometimes indicate 'gaming' is occurring. Consider a simplified example* of an item receiving ratings of 100, 50, & 0. The mean average rating would be 50. However, ratings of 55, 50 & 45 could also result in the same average. The second average might be more trusted because there is more consensus around a particular rating (a lower deviation).
(*In practice, some albums can have several thousand ratings)
This album is rated in the top 4% of all albums on BestEverAlbums.com. This album has a Bayesian average rating of 77.3/100, a mean average of 80.8/100, and a trimmed mean (excluding outliers) of 80.8/100. The standard deviation for this album is 8.4.

Headless Heroes Of The Apocalypse favourites

Headless Heroes Of The Apocalypse comments

This is an obscure funky social message album by the songwriter of Roberta Flack’s “Feel Like Making Love” and Les McCann’s “Compared to What.” Though Tracks 1 and 3 are technically religious songs, Track 1 and most of the others denounce societal ills. In the first song, “The Lord Is Back,” the Lord’s mad and is back to make “corrections” and “power reductions.” The next song bizarrely attacks Mick Jagger as being in league with the devil -- maybe because of “Sympathy for the Devil” and Their Satanic Majesties Request’s title? -- and makes a derogatory reference to his androgyny. In “Supermarket Blues,” McDaniels recounts an incident -- perhaps real -- in which a supermarket manager attacked him, an old white woman kicked him when he was down and a cop leveled a gun on him, all for trying to exchange a can of peas for canned pineapples. The last song, “The Parasite (For Buffy)” is about the genocide of Native Americans and ends with McDaniels screaming accompanied by appropriately discordant music. The music is excellent, elegant soul-funk with jazz (Alphonse Mouzon is the drummer) and rock elements.

Your feedback for Headless Heroes Of The Apocalypse