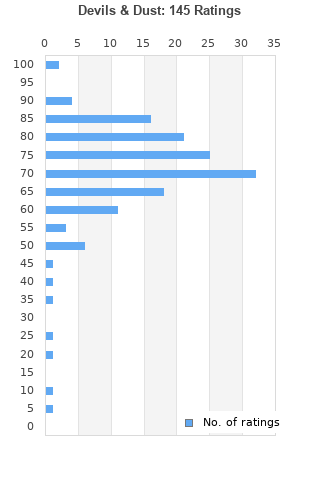 BRUCE SPRINGSTEEN - DEVILS & DUST CD / DVD - DUAL DISC - 2005 RELEASE
Condition: Very Good
Time left: 2h 59m 33s
Ships to: Worldwide
$5.00
Go to store
Product prices and availability are accurate as of the date indicated and are subject to change. Any price and availability information displayed on the linked website at the time of purchase will apply to the purchase of this product.  See full search results on eBay

Devils & Dust is ranked 17th best out of 123 albums by Bruce Springsteen on BestEverAlbums.com.

The best album by Bruce Springsteen is Born To Run which is ranked number 67 in the list of all-time albums with a total rank score of 21,778. 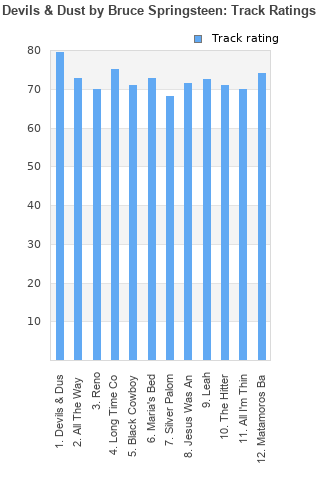 Rating metrics: Outliers can be removed when calculating a mean average to dampen the effects of ratings outside the normal distribution. This figure is provided as the trimmed mean. A high standard deviation can be legitimate, but can sometimes indicate 'gaming' is occurring. Consider a simplified example* of an item receiving ratings of 100, 50, & 0. The mean average rating would be 50. However, ratings of 55, 50 & 45 could also result in the same average. The second average might be more trusted because there is more consensus around a particular rating (a lower deviation).
(*In practice, some albums can have several thousand ratings)
This album has a Bayesian average rating of 72.5/100, a mean average of 71.1/100, and a trimmed mean (excluding outliers) of 72.4/100. The standard deviation for this album is 13.9.

this is a beautiful record

Devils & dust is Bruce springsteen's follow up to 2002's, the rising. Harking back to the acoustic sparseness of the, Nebraska, and, ghost of Tom Joad, albums, although there is a lot more band instrumentation this time around. The title track, is excellent, and the best song on the album. It's kind of a re-write of Bob Dylan's, with God on our side. Other strong acoustic tracks are the beautiful, Leah, the lovely, black cowboys, and the boxing drama, the hitter. All the way home, is the most band-like song on the record, and that particular track was recorded during the human touch/lucky town sessions. Other highlights are, Reno, which wouldn't have been out of place on the, Tom Joad, album, there's also the bluesy rock'n'roll of, all I'm thinkin'about, and the wonderful closing track, matamoros banks. Maria's bed, is great fun, similar to, Mary's place, on, the rising, but this time more country than Motown. The only weak tracks are, silver palomino, and, Jesus was an only son, but that's just my personal opinion. Devils & dust, isn't an essential Springsteen album, but it is another piece of the puzzle. Good stuff.

This was the first Springsteen album I listened to. Great songwriting. Love the title track. Doesn't hold up as strong as his previous album The Rising but this is still great music.

I'm gonna be honest. The album isn't comparing to Springsteen's past classics. The tracks range from bad to alright with one exception. The album's sole classic is the title track. Disappointing, but not awful. Just don't expect it to be Born to Run or The Rising.

It is a good album by most standards but one of the ones that has disapointed me the most. There is no real focus that you are used to with Bruce.

Your feedback for Devils & Dust