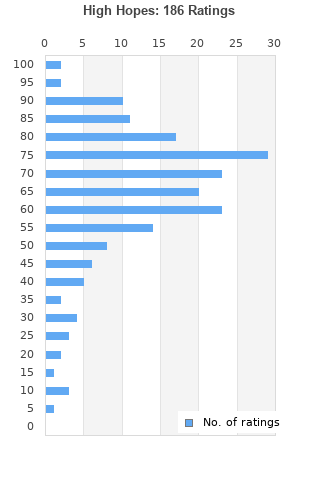 High Hopes is ranked 17th best out of 130 albums by Bruce Springsteen on BestEverAlbums.com.

The best album by Bruce Springsteen is Born To Run which is ranked number 70 in the list of all-time albums with a total rank score of 20,242. 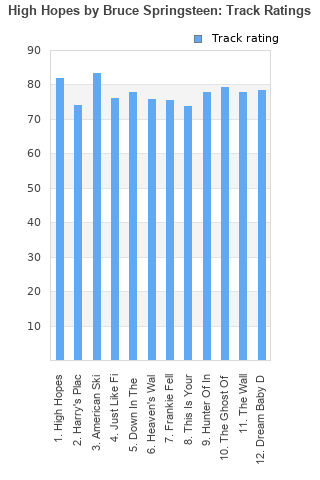 Rating metrics: Outliers can be removed when calculating a mean average to dampen the effects of ratings outside the normal distribution. This figure is provided as the trimmed mean. A high standard deviation can be legitimate, but can sometimes indicate 'gaming' is occurring. Consider a simplified example* of an item receiving ratings of 100, 50, & 0. The mean average rating would be 50. However, ratings of 55, 50 & 45 could also result in the same average. The second average might be more trusted because there is more consensus around a particular rating (a lower deviation).
(*In practice, some albums can have several thousand ratings)
This album has a Bayesian average rating of 65.6/100, a mean average of 64.9/100, and a trimmed mean (excluding outliers) of 65.2/100. The standard deviation for this album is 18.4.

High Hopes, Bruce Springsteen's 18th studio album, is a mostly uninspired set of songs. There are hints of brilliance (American Skin), but mostly it's one of the rare Springsteen albums I'm comfortable panning.

Its pretty okay, not great by Springsteen standards (especially after how good Wrecking Ball is) but for all intents and purposes its an outtakes compilation being marketed as an album so in light of that its really not too shabby. Would rather have the songs than not.

High hopes, is Bruce Springsteen's mop up album, it's unfinished business finally dealt with. There's outtakes from previous records, cover versions, and studio versions of songs that had only been recorded in their live incarnations. The album just about holds itself together. Off the covers, there's the title track, a song previously by the havalinas', it's a great gospel/rock track hybrid. The saint's, just like fire would, sounds more like Bruce than Bruce does here, and suicide's, dream, baby, dream, is a lovely closing track. Off the Springsteen songs, Harry's place, is a leftover from, the rising, sessions, and you can hear why, it wouldn't have worked on that album, it's still okay. Down in the hole, is atmospheric, and, heaven's wall, an enjoyable singalong. Frankie fell in love, is a bit lightweight, and, this is your sword, not bad. Hunter of invisible game, is Dylanish, and, the wall, is a moving cut about a musician Springsteen knew who sadly died in the Vietnam war. American skin(41 shots), is a brilliant new studio job of a track recently only available live from the Madison square gigs in 1999, and, The ghost of Tom Joad, is turned into a fiery epic, thanks to some fine guitar from Tom Morello. High hopes, for all it's hodge podge origins is still an enjoyable record, but certainly not essential, you feel that Springsteen needed to get these songs out the way before he could move on.

Had its moments but kind of a letdown after Wrecking Ball. They can't all be classics though.

Probably does not sustain the energy of Wrecking Ball (let alone his legendary much earlier work) but.... still has its moments. The re-version of Tom Joad is worth the time. So is some of the rest of this.

Good but not at the Wrecking Ball's level

Top-notch consistency with a little diversity, and Bruce's Dylan-esque vocals. I can't asy it's as good as Born to Run, though.

Your feedback for High Hopes