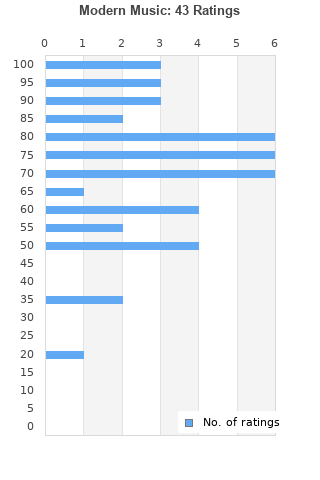 Modern Music is ranked as the best album by Be-Bop Deluxe. 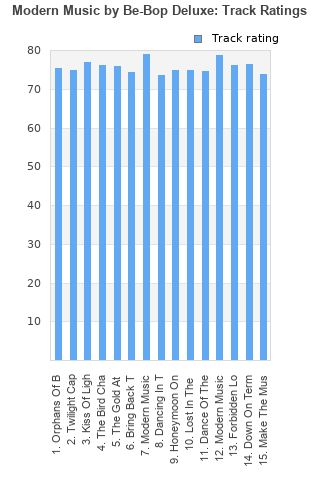 Rating metrics: Outliers can be removed when calculating a mean average to dampen the effects of ratings outside the normal distribution. This figure is provided as the trimmed mean. A high standard deviation can be legitimate, but can sometimes indicate 'gaming' is occurring. Consider a simplified example* of an item receiving ratings of 100, 50, & 0. The mean average rating would be 50. However, ratings of 55, 50 & 45 could also result in the same average. The second average might be more trusted because there is more consensus around a particular rating (a lower deviation).
(*In practice, some albums can have several thousand ratings)
This album has a Bayesian average rating of 72.3/100, a mean average of 72.0/100, and a trimmed mean (excluding outliers) of 72.0/100. The standard deviation for this album is 19.1.

Anyone who doesn't realize how good this album is...well, that's a shame. Of all the great Bebop Deluxe albums, this one is the most cohesive musically and thematically. The guitar work, band, songwriting and lyrics are simply fantastic. Another psychedelic masterpiece.

Guitar virtuoso Bill Nelson and his band Be Bop Deluxe was one of the most exciting acts that emerged in Britain in the middle of the glam rock period of the early 1970s. Stylistically, the group is clearly related to both David Bowie and Cockney Rebel.

In 1976 the group's absolute masterpiece, "Modern Music" was released. This album is definitely the most melodic, with more songs tied together in shorter suites. The album contains no less than fifteen songs which are generally of shorter length than usual. Most of the music is of such high quality that the tracks can easily stand alone outside the context of the album. A lot of songs could be brought forward here. Tracks like "Orphans of Babylon," "Kiss of Light", "Gold at the End of the Rainbow," "Modern Music", "Make the Music Magic," "Forbidden Lovers" and "Down to Terminal Street" are all titles that stand out in the Be Bop Deluxe song catalogue.

Your feedback for Modern Music