That's Why God Made The Radio (album) by The Beach Boys 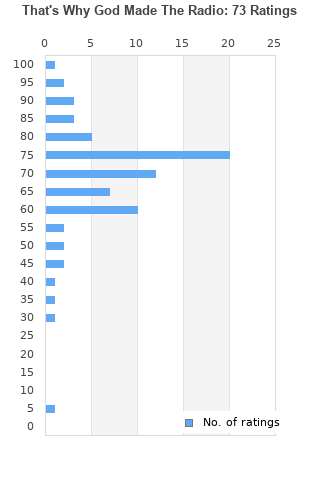 The Beach Boys-That's Why God Made the Radio CD NEW
Condition: Brand New
Time left: 7h 43m 17s
Ships to: Worldwide
$6.68
Go to store
Product prices and availability are accurate as of the date indicated and are subject to change. Any price and availability information displayed on the linked website at the time of purchase will apply to the purchase of this product.  See full search results on eBay

That's Why God Made The Radio is ranked 21st best out of 58 albums by The Beach Boys on BestEverAlbums.com.

The best album by The Beach Boys is Pet Sounds which is ranked number 13 in the list of all-time albums with a total rank score of 58,567. 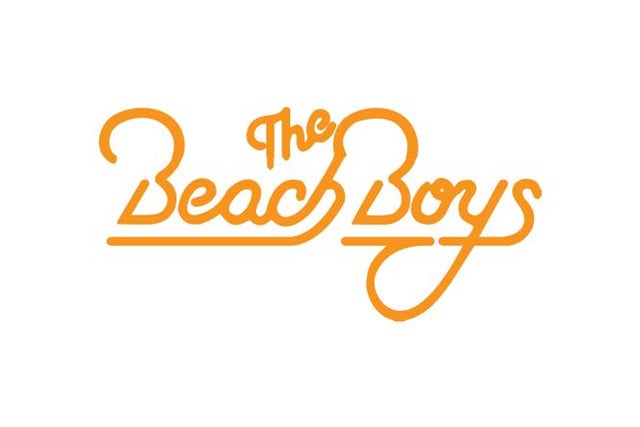 Listen to That's Why God Made The Radio on YouTube 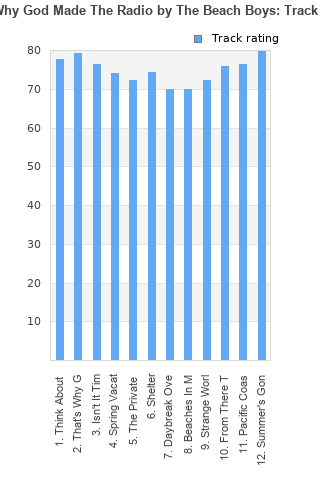 That's Why God Made The Radio rankings

That's Why God Made The Radio collection

That's Why God Made The Radio ratings

Rating metrics: Outliers can be removed when calculating a mean average to dampen the effects of ratings outside the normal distribution. This figure is provided as the trimmed mean. A high standard deviation can be legitimate, but can sometimes indicate 'gaming' is occurring. Consider a simplified example* of an item receiving ratings of 100, 50, & 0. The mean average rating would be 50. However, ratings of 55, 50 & 45 could also result in the same average. The second average might be more trusted because there is more consensus around a particular rating (a lower deviation).
(*In practice, some albums can have several thousand ratings)
This album has a mean average rating of 71.0/100. The trimmed mean (excluding outliers) is 71.8/100. The standard deviation for this album is 15.8.

That's Why God Made The Radio favourites

That's Why God Made The Radio comments

Not that good, but Summer's Gone is wonderful

Amazing comeback, their best album since L.A. The first track and last three especially are stunningly beautiful. What an achievement for a fifty-year old band, a wonderful bookend on an incredible career.

An amazing comeback offering both new and old styles. A lot of songs you could imagine being on albums back in their peak 60s/70s era. From There to Back Again and Pacific Coast Highway are fantastic

So fantastic. So great to listen to during the summer time…also, great comment from rover. Can't write a better summary than that.

I don't think anyone was really expecting an album this good. Brian can still write some great songs. Easily their best since Love You, maybe since Holland.

I had actually listened to the short audio clips on Amazon, and found them quite good, without actually turning on to them. It was only when I was encouraged to listen to the album in its whole that it dawned on me: The Beach Boys have made another classic album.

You almost forget that it's been more than forty years since the group finally delivered a really good album; and rarely has a Beach Boys album been so consistently well written. The vocals are surprisingly strong. Brian does not sound like he did in the 1960s, but Jeffrey Foskett does a convincing job on the high harmonies and Brian's lead vocals are still strong, but in a different way. Al Jardine has hardly sung with more conviction than he does on the fine "From There to Back Again". The harmony vocals are generally very tight and it is difficult to distinguish the individual voices, but pure Beach Boys sound as no other group has managed to create.

The songwriting is, as mentioned, superb. There are more songs written in the Pet Sounds / Smile style with beautiful choral voices - acapella or with very sparse arrangements. For example. "Think About the Days" which works very much the same way as "Our Prayer" did on "Smile" - also "From There to Back Again" and "Pacific Coast Highway" fall into this category, and these songs show evidence that Brian Wilson still manages to write sangs at once complex and melodic.

In the more immediately catchy category you will find a handful of potential hits / classics such as the title track "That's Why God Made the Radio". Classic Beach Boys sound - shamelessly catchy. "The Private Life of Bill and Sue", with its Carrebean beat and strong chorus is another bid for a new classic.

"Beaches in Mind" - may seem a little sketchy - but must be fantastic live-song - again a strong chorus. "Is not it Time" has a bit of the same beat as "Do It Again" - and a great build-up. "Strange World" is a really nice pop ballad. I imagine there will be many cover versions of this particular number. Not very much a typical Beach Boys number - great nonetheless.

The album has the classic slot length of about 40 minutes - a perfect length when all the songs are so listenable. I have played the album at random several times and the numbers work incredibly well together anyway.

The only thing you may miss is a few powerful lead vocals from Carl Wilson - glory be to his memory - otherwise you get more than could reasonably have been expected from a band that has been on the road for 50 years.

While I want to like this album, the only thing I like about it really is the modern mixing/mastering/producing/performance of the Beach Boys. The songs are pretty average. 7,8 and 11 did stand out to me though. Although the songs aren't great... I do like seeing it when a band can come back together and do something like this. I think the Rolling Stone's Bigger Bang was a better comeback.

Brilliant comeback? There's nothing new here, and no real standouts. A tonne of money was sunk into this, and it's nice the boys are back together. Stick to their pre 70s work. This is for nostalgia only.

Your feedback for That's Why God Made The Radio