From Under The Cork Tree (album) by Fall Out Boy 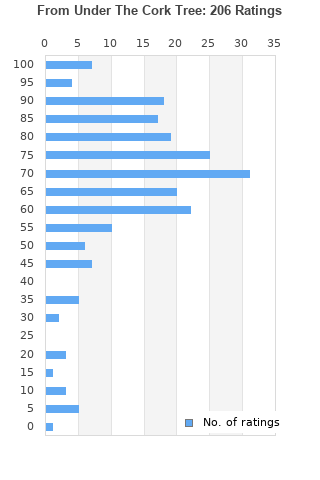 FALL OUT BOY From Under The Cork Tree Limited Edition Album Display Artwork
Condition: New
Time left: 9h 21m
Ships to: Worldwide
£17.99
Go to store
Product prices and availability are accurate as of the date indicated and are subject to change. Any price and availability information displayed on the linked website at the time of purchase will apply to the purchase of this product.  See full search results on eBay

From Under The Cork Tree is ranked as the best album by Fall Out Boy. 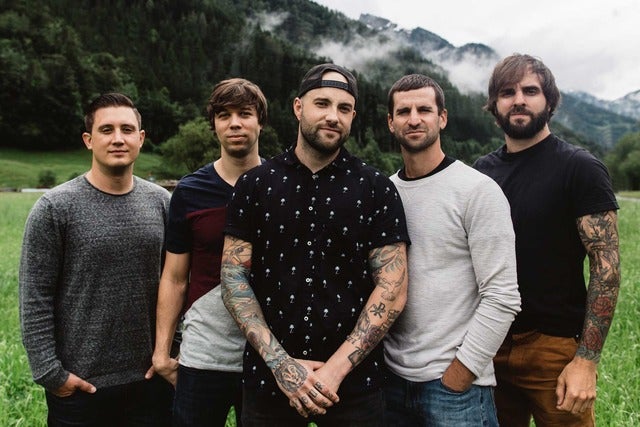 Listen to From Under The Cork Tree on YouTube 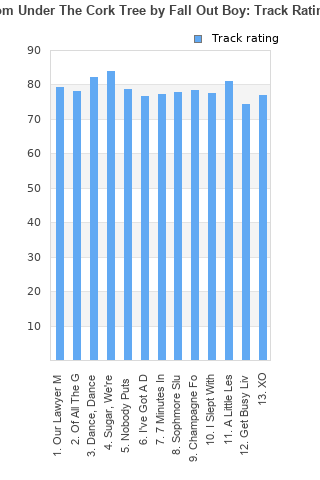 #
Track
Rating/Comments
1.
Our Lawyer Made Us Change the Name of This Song So We Wouldn't Get Sued
Rating: 78 (29 votes)Comments:

0
9.
Champagne For My Real Friends, Real Pain For My Sham Friends
Rating: 78 (29 votes)Comments:

1
10.
I Slept With Someone In Fall Out Boy And All I Got Was This Stupid Song Written About Me
Rating: 78 (30 votes)Comments:

1
12.
Get Busy Living Or Get Busy Dying (Do Your Part To Save The Scene And Stop Going To Shows)
Rating: 76 (28 votes)Comments:

From Under The Cork Tree rankings

From Under The Cork Tree collection

From Under The Cork Tree ratings

Rating metrics: Outliers can be removed when calculating a mean average to dampen the effects of ratings outside the normal distribution. This figure is provided as the trimmed mean. A high standard deviation can be legitimate, but can sometimes indicate 'gaming' is occurring. Consider a simplified example* of an item receiving ratings of 100, 50, & 0. The mean average rating would be 50. However, ratings of 55, 50 & 45 could also result in the same average. The second average might be more trusted because there is more consensus around a particular rating (a lower deviation).
(*In practice, some albums can have several thousand ratings)
This album has a mean average rating of 66.0/100. The trimmed mean (excluding outliers) is 66.6/100. The standard deviation for this album is 21.6.

From Under The Cork Tree favourites

From Under The Cork Tree comments

Favorite Songs: I've Got A Dark Alley..., Sophomore Slump Or Comeback Of The Year

They should have stayed under the cork tree. Just kidding, a lot of people enjoy their music, but I don't. I can sort of dig it.

Oh, it is difficult to rate this album, since it's one of the ones that defined my puberty. And damn if this isn't a catchy album, and I'll probably keep listening to it for as long as I like pop punk. BUT there is not very much in terms of variety in the album, and the sound itself, while instantly noticeable thanks to Pete's voice, is not really anything new. Objectively: 3/5. Subjectively: 4/5.

In my top 100 above all sorts of classics, blah blah blah. These songs, for the most part, are catchy as chlamydia, and even well written most of the time. There are most certainly better albums out there, but this is as sentimental a favorite as it gets for me. "Of All the Gin Joints in All the World," "Champagne for Real Friends, Real Pain for Your Sham Friends," "A Little Less Sixteen Candles, a Little More 'Touch Me,'" and "XO" are all among Fall Out Boy's best songs.

Too often compared with the masterpiece A Fever You Can't Sweat Out. I didn't hate this album. But I didn't love it either. Actually, I quite enjoyed Folie A Deux, which is strange considering that many people hate that album. But oh well. Personal tastes differ.

Cute and catchy. Disposable fun, but nothing to last the ages.

One of the greatest punk-pop albums of all time. The last rock band to rule pop radio stations.

Your feedback for From Under The Cork Tree