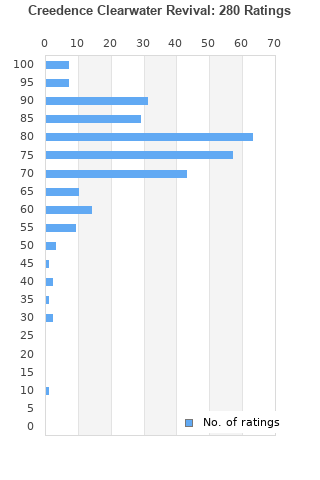 The best album by Creedence Clearwater Revival is Cosmo's Factory which is ranked number 189 in the list of all-time albums with a total rank score of 9,209. 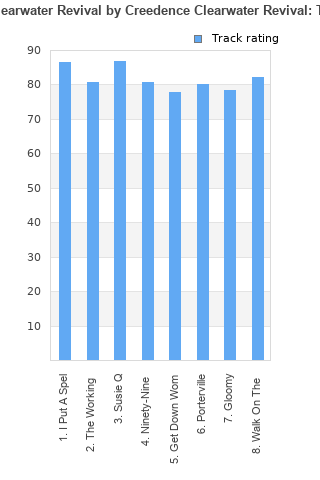 Rating metrics: Outliers can be removed when calculating a mean average to dampen the effects of ratings outside the normal distribution. This figure is provided as the trimmed mean. A high standard deviation can be legitimate, but can sometimes indicate 'gaming' is occurring. Consider a simplified example* of an item receiving ratings of 100, 50, & 0. The mean average rating would be 50. However, ratings of 55, 50 & 45 could also result in the same average. The second average might be more trusted because there is more consensus around a particular rating (a lower deviation).
(*In practice, some albums can have several thousand ratings)
This album is rated in the top 4% of all albums on BestEverAlbums.com. This album has a Bayesian average rating of 77.2/100, a mean average of 76.5/100, and a trimmed mean (excluding outliers) of 77.4/100. The standard deviation for this album is 11.9.

The Beginning of a sensational string of evergreen rock albums.

Richard Hell's cover of Walk On The Water is much better than the original here--I don't know how many times a vocalist ever outdid John Fogerty, but Richard Hell did it on this tune. They made a lot of progress over the next year after this one.

An good debut album from Creedence Clearwater Revival. Full of good old fashioned rock'n'roll, it's features some of the band's greatest performances. Best of the bunch without a doubt is the stunning version of, I put a spell on you, CCR's best ever cover in my opinion. All in all, not the best CCR album, they would come, but this is a rip roaring start.

I like how they start out as a blues rock group, but really have their own character and true songwriting in their own whit. Something often missing from these early white dude blues rock bands. Also love how they put a southern voodoo feel on I Put A Spell On You... probably best version of the song.

Best Tracks: Susie Q and I Put a Spell On You

A pretty basic, blue collar blues/rock record. Nothing all that fancy or special, especially when compared to their later work, but a diverting listen.

I agree, worst of the first 5 but still has a few good songs.

Creedence started out good and with each successive record (until Pendulum) they got a little bit better. This, thus, is one of their least good. Being this good at their worst is quite the feat.

Your feedback for Creedence Clearwater Revival