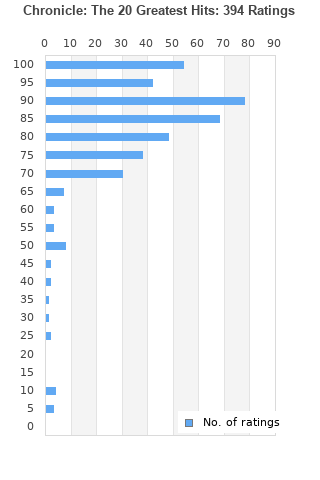 Chronicle, The 20 Greatest Hits
Condition: Acceptable
Time left: 2d 3h 2m 41s
Ships to: Worldwide
$22.58
Go to store
Product prices and availability are accurate as of the date indicated and are subject to change. Any price and availability information displayed on the linked website at the time of purchase will apply to the purchase of this product.  See full search results on eBay

Chronicle - The 20 Greatest Hits is ranked 5th best out of 20 albums by Creedence Clearwater Revival on BestEverAlbums.com.

The best album by Creedence Clearwater Revival is Cosmo's Factory which is ranked number 215 in the list of all-time albums with a total rank score of 9,056. 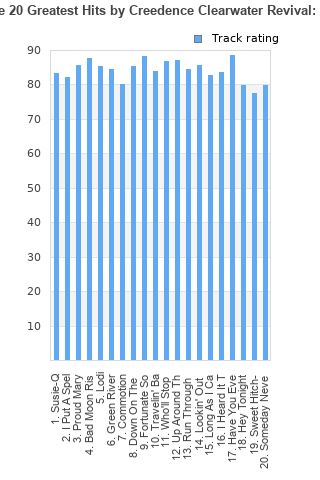 Rating metrics: Outliers can be removed when calculating a mean average to dampen the effects of ratings outside the normal distribution. This figure is provided as the trimmed mean. A high standard deviation can be legitimate, but can sometimes indicate 'gaming' is occurring. Consider a simplified example* of an item receiving ratings of 100, 50, & 0. The mean average rating would be 50. However, ratings of 55, 50 & 45 could also result in the same average. The second average might be more trusted because there is more consensus around a particular rating (a lower deviation).
(*In practice, some albums can have several thousand ratings)
This album is rated in the top 1% of all albums on BestEverAlbums.com. This album has a Bayesian average rating of 84.2/100, a mean average of 82.6/100, and a trimmed mean (excluding outliers) of 84.5/100. The standard deviation for this album is 16.5.

Someone did a very good job of choosing their best songs. The only misstep is the omission of"Born On the Bayou". That being said, their individual albums are well worth having.

Great comp overall but where's Born On The Bayou? I would have left off Suzie Q or Sweet Hitch-Hiker for that one.

This album is part of my personal top 100 because I can't do this band the credit it deserves if I don't put a Greatest Hits in my top A00. You can check out my other top 100 albums (with additional comments) as well.
All the songs on this album are marvelous and are a fantastic blend of the superb voice of John Fogerty and some great guitar playing and song writing.
"I Put a Spell on You" is still one of the best version amongst the variety of versions around and also songs like "Up Around the Bend" and "Who'll Stop the Rain" are outstanding.

This is a great album! Sometimes compilations are deserving of the praise they receive. This is certainly one of them. Remember that 90% of the songs in this collection came out in the 3 year span between 68-70. That's an insane number of CLASSICS in a short period of time.

Long the standard CCR compilation, it features all the big hits. Not a weak track in the bunch, many are certified rock classics. The companion, Vol. 2, is loaded with fantastic album selections. There's still no substitute, although both volumes are in need of remastering.

The best compilation I've heard. Normally I don't like compilations, but this one is fantastic!

Keep in mind that this is a greatest hits album, so it is stacked from top to bottom. There is absolutely no filler tracks here.

Surprised to see that Fortunate Son isn't a track pick. It's really captures the feeling of that time period

Your feedback for Chronicle - The 20 Greatest Hits