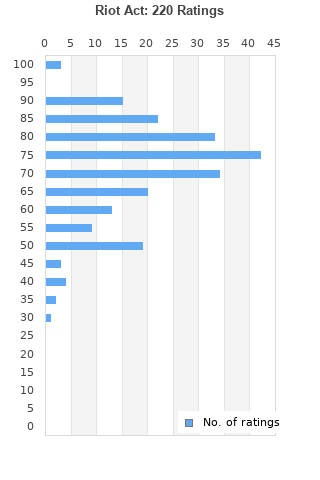 Pearl Jam Riot Act 2002 Epic Records Mint OOP
Condition: Like New
Time left: 5h 42m 41s
Ships to: Worldwide
$8.00
Go to store
Product prices and availability are accurate as of the date indicated and are subject to change. Any price and availability information displayed on the linked website at the time of purchase will apply to the purchase of this product.  See full search results on eBay

Riot Act is ranked 10th best out of 80 albums by Pearl Jam on BestEverAlbums.com.

The best album by Pearl Jam is Ten which is ranked number 50 in the list of all-time albums with a total rank score of 24,745. 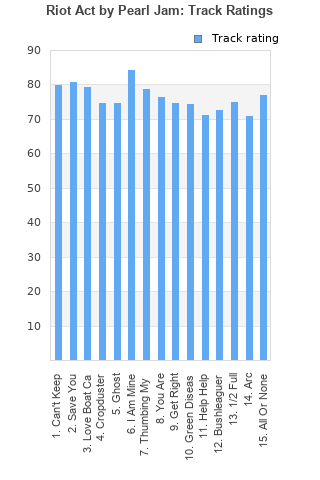 Rating metrics: Outliers can be removed when calculating a mean average to dampen the effects of ratings outside the normal distribution. This figure is provided as the trimmed mean. A high standard deviation can be legitimate, but can sometimes indicate 'gaming' is occurring. Consider a simplified example* of an item receiving ratings of 100, 50, & 0. The mean average rating would be 50. However, ratings of 55, 50 & 45 could also result in the same average. The second average might be more trusted because there is more consensus around a particular rating (a lower deviation).
(*In practice, some albums can have several thousand ratings)
This album has a Bayesian average rating of 71.8/100, a mean average of 71.5/100, and a trimmed mean (excluding outliers) of 71.7/100. The standard deviation for this album is 13.2.

Underrated album of Pearl Jam. But maybe not as consistend as previous albums, especially Ten.

Underrated album by PJ.I'd put it in there top 5 albums.The only drawback for me is that it's a little too long.

Probably the most undervalued work by Pearl Jam. Surely is not at the level of Ten but I don't think that listening to this is a waste of time. If you love Pearl Jam, you have at least to like it.

Favoritas: I Am Mine, Love Boat Captain, Save You

This is Pearl Jam at their worst.

2 classic songs in Save You and I Am Mine

Can't Keep could be great but is too short. Just as it is about to hit its stride it ends.

The rest of this is just a bummer. The band sounds bummed out and old.

Thumbing My Way back to heaven? What? are you strumming your guitar to heaven? Hitchhiking there? Stupid

Everything after Get Right which is an average rocker is bad.

Surprisingly, this is the first Pearl Jam album I actually owned. I almost didn't continue after this. I'm glad I did but Riot Act just isn't very good. I rank it dead last in Pearl Jam catalogue.

I'll always say this. I Am Mine is one of the best songs Pearl Jam have done.

It's interesting at times, but pretty hit or miss, and nothing essential.

Here we are transported in dusty dirt roads and trails. Everything must give us a rock band, is Riot Act!

Your feedback for Riot Act