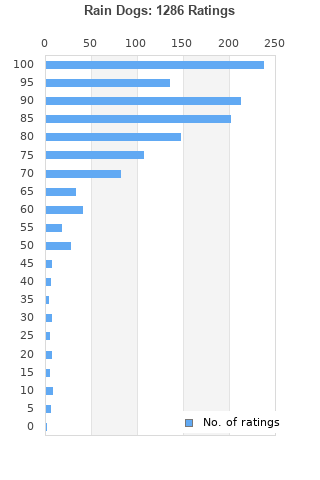 Tom Waits Rain Dogs CD
Condition: Very Good
Time left: 6h 47m 35s
Ships to: Worldwide
£2.99
Go to store
Product prices and availability are accurate as of the date indicated and are subject to change. Any price and availability information displayed on the linked website at the time of purchase will apply to the purchase of this product.  See full search results on eBay

Rain Dogs is ranked as the best album by Tom Waits. 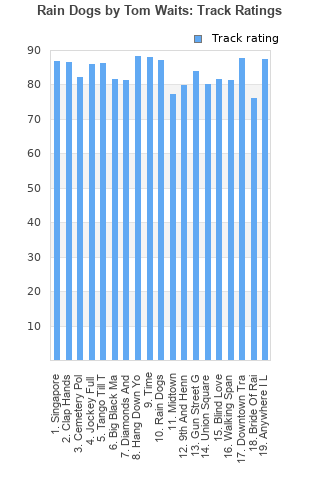 Rating metrics: Outliers can be removed when calculating a mean average to dampen the effects of ratings outside the normal distribution. This figure is provided as the trimmed mean. A high standard deviation can be legitimate, but can sometimes indicate 'gaming' is occurring. Consider a simplified example* of an item receiving ratings of 100, 50, & 0. The mean average rating would be 50. However, ratings of 55, 50 & 45 could also result in the same average. The second average might be more trusted because there is more consensus around a particular rating (a lower deviation).
(*In practice, some albums can have several thousand ratings)
This album is rated in the top 1% of all albums on BestEverAlbums.com. This album has a Bayesian average rating of 84.4/100, a mean average of 82.6/100, and a trimmed mean (excluding outliers) of 84.5/100. The standard deviation for this album is 17.1.

For years, Tom Waits constructed a visage of a midnight, woebegone crooner slouched over a piano which supported a glass of hard liquor home to a school of swirling cigarette ash. For years, that character would morph and contort into something less and less conventional until the 1980's ushered in a Waits completely detached from society who resembled a vagabond guttersnipe that embraced a new sonic identity. Hobo Waits would first surface in earnest on 1983's Swordfishtrombones, a record characterized by unorthodox percussion motifs, reminiscent of a subterranean city of banished circus mutants planning their ascent. Still, on that LP, he embodied the role of a freak show ringmaster parading his ostracized compatriots through the streets. On Rain Dogs, Waits' ninth full-length release, he more closely examines the lives of the disenfranchised, alleyway dreamers who live in sky-blackening squalor. The album approaches this as a purveying construct rather than a single track one-off that Waits commonly flirted with earlier in his career. However, instead of employing the prior method of getting shit-faced in downtown L.A. while mining for narrative inspiration from Skid Row's finest, Waits decided to put himself in their shoes on Rain Dogs. The music produced seems decidedly out of place when set against the backdrop of a 1980's music landscape dominated by new wave and synth pop tunes. Waits rarely gets enough credit when discussing music's most triumphant reinventionists, but the man who claimed to be born in a taxi cab was guilty of metamorphizing more than once in his checkered career. Rain Dogs just happens to be his finest reawakening.

The record begins with "Singapore" which functions as a gothic sea shanty of sorts (if you can imagine such a thing). Similar to the opening track of Swordfishtrombones, "Singapore" shines light on a theatrically-rendered sub-culture with a ragtag group of sailors as his subject. Waits declares, "The captain is a one-armed dwarf, he's throwing dice along the wharf; In the land of the blind, the one-eyed man is king." The track chugs at a steady pace, lead by trumpet and junkyard percussion and invites the listener into the world of Rain Dogs. Second track, Clap Hands, continues the trend of unorthodox percussion, employing the marimba as the spine of the song. The piece is centered around a grotesque locomotive trip through the Big Apple with Waits himself attaching backstories to fellow passengers to pass the time. "Cemetery Polka" arrives third and it features a bizarre roll call of the most aberrant family members one could have. At this family reunion, accordion and farfisa organ take center stage. Waits describes, "Uncle Bill will never leave a will, and the tumor is as big as an egg; He has a mistress, she's Puerto Rican and I heard she has a wooden leg." On "Jockey Full of Bourbon", he recants a tale of a drunken, fragmented evening with the help of conga drums and a baritone sax. Waits invokes the spirit of his idol Jack Kerouac here with his prose, "Schiffer broke a bottle on Morgan's head and I've been stepping on the devil's tail; Across the stripes of a full moon's head, through the bars of a Cuban jail." Waits' lyricism displays shades of influence from Bob Dylan to Allen Ginsberg while effortlessly being raw, idiosyncratic and indigenous. Fifth track, "Tango Till They're Sore" is a waltzy, crooked ballad seemingly played by the town drunk on a 300 year old grand piano. The track is seemingly the last will and wishes of a destitute, easily visualized on the curb near a dive bar as light from the nearest window backlights him for his small gathering of similars. Waits promises, "I'll tell you all my secrets, but I lie about my past; Send me off to bed forevermore." It's a proposition that receives further treatment later in the LP.

"Big Black Mariah" showcases a howling Waits describing this Mariah as a black hearse coming for New Orleans' recently deceased. The song includes an appearance from Keith Richards on guitar which is a match made in heaven with Waits' one of a kind vocal delivery. Waits concludes, "He's got a wooden coat, this boy is never coming home." Eighth track, "Hang Down Your Head", is far more digestible than previous entries. Waits recruits a softer touch in the solemn, reflective track. The cut is vaguely Springsteenian, if the boss had swallowed glass while smoking a cigar.. The end result is something profoundly earnest and devoid of any decoration, strengthening the pathos within. Speaking of pathos, Waits doubles down on ninth track "Time", an understated guitar stroll evocative of his 1970's output. Here, Waits isn't trying to rekindle a former love. He knows he's incapable of it and urges his paramour to move on. It's symbolic of Waits giving himself to abstraction and leaving the world of lounges and muses behind. The title track introduces itself with wheezing accordion and chronicles a man who champions his position on the outskirts of society. These Rain Dogs are a proud bunch that shoo away taxis in favor of walking through torrential downpour and dance all night long, free of societal restraints and commitments. It's also a track that doubles as a rallying cry for Earth's outcasts during Waits' live sets. The LP winds down with one of its most enduring cuts. "Downtown Train" was made famous by Rod Stewart's rendition, but it's Waits' original that retains the piece's soul and depth. Waits pens a siren song for a nameless beloved as he rides a New York City train in the hopes that she will be amongst those in attendance. He questions if he himself would be good enough for his soulmate and how she'll be illuminated amongst all the "Brooklyn girls looking to break out of their little worlds". Waits' delivery here is remarkably passionate and vulnerable that it provides lucidity to his character's eternal strife. The record culminates with the hyper-appropriate "Anywhere I Lay My Head", a jubilant, triumphant funeral march celebrating the life and times of defiant transient. Sonically, it wouldn't be out of place at Mardi Gras, with brass tones sending the narrator off into the great beyond. He declares, "I don't need anybody because I learned, I learned to be alone and I say anywhere, anywhere, anywhere I lay my head, boys; I will call my home." It's a glowing, stirring epitaph that symbolizes America's homeless and calls upon to the listener to undergo a paradigm shift. A miraculous end to a poignant record.

Waits' prophetic prose on Rain Dogs would be distinctly pertinent both within the walls of a philosophy classroom and sketched onto the stall of a subway toiletry. Few men can walk such a thin line and Waits' approach to this principle was never more dynamic than on Rain Dogs. His provocative commentary and crystal clear imagery are bolstered even further by the daring sonic experimentation that helped define the album. In a few short years, Waits graduated from barfly, lonesome anthems to concept albums about hobo culture and sideshow empowerment. Only Tom himself could make the transition between these two abstracts an unbridled success. Even with the runaway acclaim garnered with Rain Dogs and subsequent albums, Waits has rarely seen consistent recognition as one of history's finest songsmiths and innovators. However, to those who know his work well, it never fails to shine as brightly as a silver dollar intertwined amongst the discarded waste of a city's populace. His underground appeal is his lifeblood and Rain Dogs is his inspirational tale to endlessly entertain an audience of three that feels like three-hundred huddled around a barrel of fire to escape old man winter's scorn.

Not sure I've heard better from Tom Waits, but I ultimately prefer my urban noir a little more Steely Dan slick.

This was an awesome album. A bunch of filler as well, but scattered well enough that it doesn't drag the album down.

A timeless triumph in the musical world as a whole, standing as an incredibly poetic, creative and original collection of songs that each possess their own ability to grasp you in a wave of different emotions. When you feel it, you really feel it.

In 1985, Tom Waits released "Rain Dogs". The album is unclassifiable: it is both jazzy and rock. This album offers us 19 short titles assembled strangely. I'm a big fan of Tom Waits: his music is weird but really interesting. His voice is extremely special and creates a reel universe around his music. This album is a real musical experience to live at least once in this life. The guitarist Keith Richards is present on some songs of the album. "Rain Dogs" is one of my favorite albums of the 80s, it is really excellent and creative.

Your feedback for Rain Dogs