It Was Written (album) by Nas 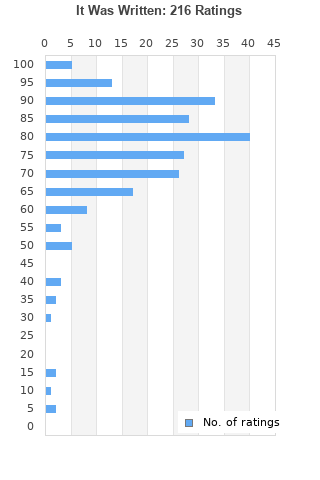 It Was Written is ranked 2nd best out of 16 albums by Nas on BestEverAlbums.com.

The best album by Nas is Illmatic which is ranked number 74 in the list of all-time albums with a total rank score of 20,086. 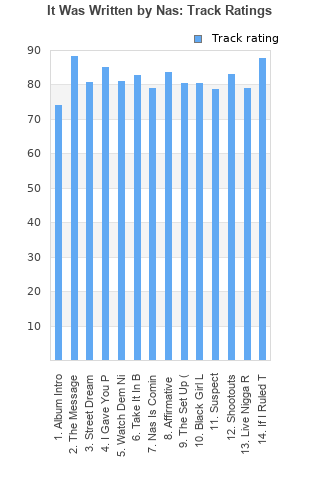 It Was Written rankings

It Was Written collection

It Was Written ratings

Outliers can be removed when calculating a mean average to dampen the effects of ratings outside the normal distribution. This figure is provided as the trimmed mean. A high standard deviation can be legitimate, but can sometimes indicate 'gaming' is occurring. Consider a simplified example* of an item receiving ratings of 100, 50, & 0. The mean average rating would be 50. However, ratings of 55, 50 & 45 could also result in the same average. The second average might be more trusted because there is more consensus around a particular rating (a lower deviation).
(*In practice, some albums can have several thousand ratings)
This album is rated in the top 7% of albums on BestEverAlbums.com. This album has a mean average rating of 75.0/100. The trimmed mean (excluding outliers) is 76.6/100. The standard deviation for this album is 17.2.

It Was Written favourites

It Was Written comments

Can't say this isn't enjoyable. Nice production. Nice rapping. But the cynical switch in subject matter and drop in lyric quality from the debut grates. Straight head nodder though even with the misgivings. Better judgement says I'm wrong but i can't help but enjoy it.

When you have to follow-up one of the best albums ever made, you can only hope to do this well. I'd be a contrarian, and a lying one at that, to tell you this is better than Illmatic, but it's a powerful project that demands your attention.

If 4 or 5 weak tracks were omitted, we might have an Illmatic pt. 2 here. Still a great album just from the power of the first 8 tracks and the final big single. "I Gave You Power" is some potent writing that never ceases to give the chills. The beat on "The Message" and "Take it in Blood" are also phenomenal and construct the albums eerie atmosphere.

The first half is incredible!

Your feedback for It Was Written